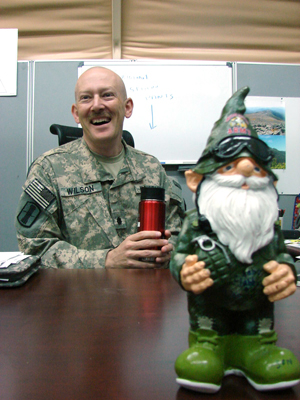 An enlisted gnome named O'Malley plays a key role in conducting a war in Arabia without problematic human casualties.

CAMP FATWA, Kuwait -- American television audiences have seen wondrous video of the military's hovering, picture-taking robot hummingbird. But it is only one facet in "Operation Bow and Back Away," President Obama's concept of a war in the Middle East without the muss and embarrassment of human casualties or victory.

Some aspects of this war--which Mr. Obama ended with the withdrawal of all U.S. forces some time in late 2010--require physical contact with the enemy. And here, again, American prowess in robotics is the key to winning battles to mutual understanding.

O'Malley, pictured here, has the vital mission of waddling up to a gathering of young, swarthy Jihadists, offering up his wares--one live grenade with the pin pulled--and then engaging them in casual riddle games about Koranic verses, until their time has expired.

Lt. Col. Daniel Wilson of Concord, New Hampshire, shown in the background operating the large joystick that controls O'Malley, will remotely move O'Malley's wobbly legs and guide him to the terrorists to be humanely "put down," after O'Malley reads them their Miranda warnings that they have the right to remain silent. Military planners, however, have conducted tests that show that the average Jihadist on the battlefield cannot resist proving his knowledge of Koranic dogma. The translation from English to the local dialect of Arabic is done by Watson, the IBM computer that recently pwned two human fall guys on Jeopardy! Thus occupied, the adversary spends his final moments in this world before each passes on to the next, to meet his 88 virgin raisins.

For more fake news on this topic, read:
After game-show win, Watson comes out

Wilson, of course, is eager to return home to Concord, a state capital visited yesterday by Republican Presidential hopeful Michele Bachmann, who praised it as the site of the "Shot Heard 'Round the World," which it would indeed be, if only it were located fifty miles south. But he is in no hurry. "Technically, you see, we all went home last year," he says. In October, just after the detention center at Guantanamo closed for good.