UnNews:Tigger Woods: The Truth About Those Pooh Stick Messages 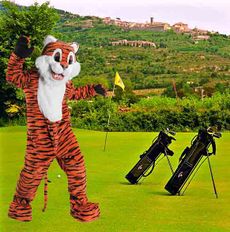 Tigger Woods on the golf links in happier times.

ORLANDO, Florida -- Disgraced animal children's character Tigger Woods has asked for privacy after the publication of incriminating Pooh Stick messages on the internet. Their lurid invitations to tickle my tummy and I need some tender loving stuffing have shocked the stripey one's fans and put in question Tigger's lucrative career in Disneyland.

Known for his bouncy personality , Tigger has asked for "forgiveness" from his friends at the Pooh Corner Golf Club where messages he had written to Little Red Thigh High Riding Boots and other women were discovered. Besides Red Riding Hood, there were a few other names mentioned on the sticks including cocktail waitress Betty Boop and nightclub singer Minnie the Moocher.

"I have been a very bad Tigger",' said a tearful Woods . "I have been happily married to Pippi Longstocking since we met at a screening of Mamma Mia in Stockholm where I was playing a Crazy Golf tournament against a bunch of trolls . I am very sad she has found out that I had been seeing Red Riding Hood in the forest."

Tigger Woods had managed to keep his illicit relationships a secret from Pippi by insisting he needed more golf practise to 'score more birdies' with his eight inch iron and long putter. The bunch haired , Swedish smorgasbord had no idea her 'Tigger' was secretly going down to the woods to play real life 'Teddy Bears Picnic' with the The Boobs in the Red Hood .

Speaking through her lawyers (Christopher Robin and Associates) , Pippi said that she was prepared to forgive Tigger for his indiscretions if the fake fur philanderer put 50% of his recent earnings in her bank account. So far Tigger has refused to comply with her demands and is currently staying with Eeyore to cheer himself up. Tigger is requiring DNA testing before admitting to fathering any of Rabbit's many "friends and relations".

Tigger's friend Kanga says he is a misunderstood toy and that the lack of female company in 100 Acre Wood was enough to drive anyone to look for illicit pleasures with other celebrity shy fairy tale characters.

Winnie the Pooh and his relationship with Piglet has been the subject of much speculation. A reporter suggests that Pooh's attempts to come out of the closet were stymied when his portly figure got stuck in the doorway.