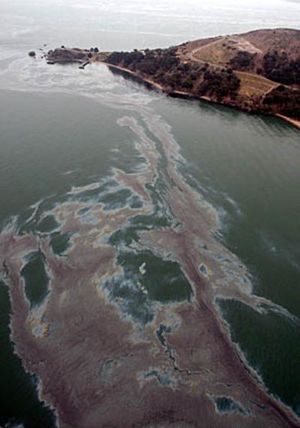 The "Texas tea" is yours for the taking!

NEW ORLEANS, Louisiana -- What started off as an environmental nightmare for most Gulf residents has turned into a prospecting free-for-all locals have started to call the "Black Gold Rush." At the heart of it is one native fisherman who believes residents have been looking at this situation the wrong way.

"At first, it seemed like a total doomsday scenario for me and everyone trollin' these waters, what with the oil killin' all the fish and stuff," said shrimping captain Horace Dauterive. "But when my first mate said, 'Hey, aren't we overpayin' for that stuff at the gas station?' shrimpin' was startin' to look like child's play." Their first attempts to catch the oil were fruitless, but with practice and a little bit of American ingeniuity, they quickly caught on.

"First, we tried to lure the oil closer. We must have spent all day throwin' all kinds of chum into the water, everything from turbines to private investors. Our nets let a lot of the oil through, so it wasn't quite the payout we expected, but we didn't give up that easy." A converted Fein 9-20-24 Turbo I 6-Gallon Wet/Dry Vacuum, with Auto-Start hooked to a Pratt & Whitney JT9D jet engine was siphoned to a 5000-gallon commercial fermentation tank to collect the crude at an industrious rate.

BP had tried to quarantine the perimeter surrounding the Deep Horizon, concerned that, because the explosion happened at the beginning of hurricane season, a Katrina-like event could spell bankruptcy for BP and a greater part of the oil industry. The real amount of crude being pumped into the waters inflated from 5,000 gallons a day to a staggering 2 million, exposing BP's marketing strategies such as "peak pricing."

"It's not bad enough that we have revealed how much oil is really left in the world," said an industry spokesman who has since left his job, "but now a major weather event could distribute free oil over large portions of the Gulf states, and if everyone gets it for free, that's really going to suck for my company."

What does this mean for the future of oil drilling? Many are pressing for more oil wells to be unleashed into the ocean in order to liberate consumers from inflated energy costs.

"If more companies would follow BP's example, oil collecting will become the new free enterprise in America and beyond," says Mr. Dauterive. Scores of boaters, yachters and entrepreneurs alike have flocked to the oil flooded region with buckets, shop-vacs, and illegal immigrants to cash in. Mr. Dauterive has already registered a second business--He aims to use his old shrimp boat to guide amateur oil harvesters to the most lucrative waters.