UnNews:The election is finally over! Ron Paul disposes of other candidates in ironic ways, elects self president of America. Keen work, Ron! 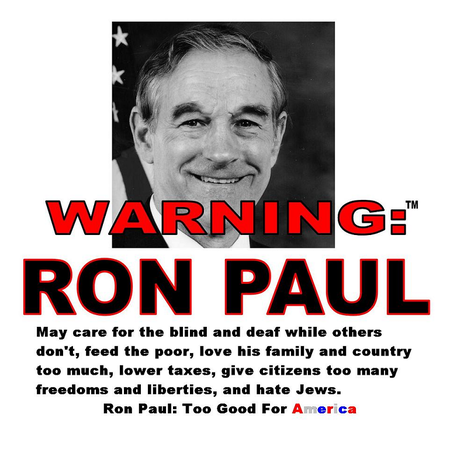 Ron Paul didn't officially win over all of the ignorants in America, but this helpful ad campaign should have them coming to him in droves!

In a stunning turn of events, presidential hopeful Ron Paul defeated all of his competitors, Democratic and Republican, before the start of the general election. Most of the American population and politicians are dumbfounded as to how he did this, so swiftly and flawlessly, but us Ron Paul supporters are not surprised in the least. It seemed only a matter of time that he would pull out all the stops and start the Ron Paul REVOLUTION, and to think it would have worked so well!

The crown prince of America picked off his opponents one by one, starting with the weakest: the Democrats. He crushed the hopes and dreams of the uppity Barack Obama by pointing out that only 3/5ths of his base would have their votes counted (not to mention how many negro convicted felons there are). Obama was disheartened as he realized his campaign was hopeless, but being the Good Samaritan Ron Paul is, he graciously sent Obama off with the generous gift of forty acres and a mule.

Disposing of Hilary Clinton was harder but no challenge. While Clinton possessed the advantage of having a lack of testicles to be kicked in, but she was cursed by having an absolute fool for a husband. Ron broke his will first by gazing into his soul in an epic six minute staring contest, then convincing the hypnotized fool to poison the Cajun dinner he traditionally cooks for his wife. Bill was grieved as she lay writhing on the floor, but got over it and hit the town with Eliot Spitzer a mere hour later. I suppose if that woman had stayed in the kitchen, she wouldn't be slowly and painfully dying!

As for McCain? He was but the simplest one to dispose of; all Ronnie had to do was pull his life support plug. Take that, natural aging!

Well she should worry no more about that, because Ron Paul is finally our Dear Leader, and ready to return this tainted country to the holy, Puritanical ways of old! A vice president has not yet been chosen, my money is on David Duke, but the first executive order has already been made: Every major city in the nation, and the nation itself, has had its name changed to somehow incorporate the names "Ron" or "Paul". Only fitting, since Ron Paul doesn't just lead RonMerica, he is RonMerica.

The REVOLUTION has arrived! Await further updates straight from the desk of The Chestnut, the most outspoken Ron supporter in the United States of RonMerica!