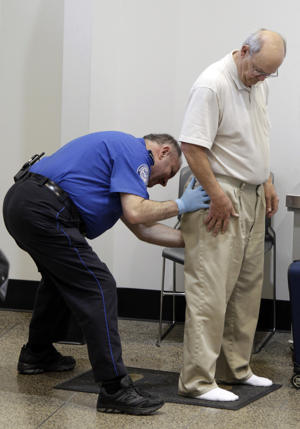 A TSA agent, clearly not enjoying his job as much as he should be.

WASHINGTON, D.C. -- The “awkward patted search” combined with special virtualized strip search technology, introduced earlier this year as part of a revolutionary security approach developed in secret by the United States Government and designed to keep terrorists feeling ridiculously uncomfortable with conventional airline transport, has become a huge success, as the number of terrorist attacks has dwindled ever nearer to the target number of zero. But now, with the incoming onslaught of holiday travellers, top security experts worry that we do not yet have the capacity to thoroughly feel up the general populace at rates that have been scientifically determined to be effective.

The problem demographic? The elderly.

In a survey conducted by the National Institute of Survey Conducting, out of the 50,000 people who number among the TSA’s employees, 70% said that they are more than happy to fondle the private areas of miscellaneous persons aged 13-55 while a mere 15% said that they enjoy doing the same to persons older than 55.

“It’s unfortunate, a truly unfortunate conundrum we‘ve put ourselves in,” said Steven White, a professor of Transpatory Legalism at Scrotemtouch University. “The media has to take at least some responsibility. They’ve created such rampant negative social stigmas against the feeling up of older persons and now look where it’s taken us: fearing for our safety. As far as I’m concerned, as long as 85% of America’s elderly go un-thoroughly fondled, the terrorists have won.”

It may come as no surprise that the TSA has already gone out of its way to hire only people with sick, perverted sexual fantasies, unfit for any conventional sort of career, but this revelation has caused great distress and especially criticism from many international security organizations.

“How can we trust that British citizens are safe in American airports when we know that the Muslim extremists can just cruise along, disguised as an old people, without any reason to suspect that they’ll be fingered around the testicles or poked up the anus a bit? Or felt beneath the brassiere? Sheer nonsense,” said Robert Krill, a British security commissioner.

The French and Japanese too have expressed their disapproval, requesting that all persons planning flights to their countries be subject to strip search before boarding.

Despite the bad press, the TSA is still working hard to find a way to alleviate the situation and bring Airport security forces back on good terms with the public in time for the holidays.

“We’ve even considered opening up job opportunities to prisoners, but again, sadly, we’ve found that there simply are not enough sex offenders who take an interest in fondling the elderly. Of course we’ve got plenty of agents to cover the children, however,” said one TSA spokesperson.

Some, however, still feel that even if one were to fill the TSA with enough gerontophiles to cover demand, this would still not solve airport security’s greater problem. Many concerned citizens have criticized the blatantly invasive system from the beginning for not being cost effective.

“At this point, the government should reasonably require that all citizens come to the airports fully nude, perhaps wearing nothing but a bathrobe, and simply flash TSA officers their genitals, thus saving the countless dollars we waste on humiliating people tactilely,” said Annette Henderson, an advocate for Greenpenis.

Airport security centers across the nation continue to seek out new perverted recruits and adjust their staff development programs in an attempt to address the concern. In the meantime, it seems security forces will have to do with their special virtualized strip search technology machine scanner things, which cause cancer.