BLACKBURG, Virginia -- Virginia Tech student Cho Seung-Hui recently received a controversial punishment in his English class when he was ordered to commit suicide due to the low quality of his creative writing assignments.

Although most administrators outside of Japan frown on the use of ritual suicide, there are some in the US who advocate it as a means of disposing of students, particularly artists, who will never have anything useful to offer society.

A Professor Ghost Dog had this to say: "A samurai must be ready to commit sepuku upon the death of their master, or if they write a really crummy play."

When asked to justify the order, Mr. Sang-Wii's teacher pointed out that one of his plays involved a boy throwing chainsaws at his step father, who was a pedophile. She referred the boy to counciling in hopes of teaching him to write, but that failed. After having to page through another paper full of dialogue such as "I will not be molested by an aging balding overweight pedophilic stepdad named Dick!", it was decided that inclusion in the school's crack suicide squad (pictured) was the only option remaining.

Liberal pussies have protested the disciplinary action, pointing out that life is sacred and beautiful like snow flakes, as well as the fact that during his ritual suicide Seung-Hui might have hit a few other classmates.

President Bush, who advocates the measures as part of his No Child Left Alive act, had this to say about the reaction: "These people are crazy and should be ignored entirely. When someone writes a play titled "Richard McBeef" enforced elimination from the gene pool is clearly an option."

Jack Thompson, a noted video game advocate, was quite interested in basing a violent and plotless video game off of Skang-Who's writings, but may have to fight Mr. Manthrust for the rights.

Meanwhile, students who had read his work gathered outside the university to cry, to console, and to offer eachother company in these dark times.

"His writing was expressionless..." Said one.

"It was just off in a very, very creepy way" Said a girl from his class.

"He was the kind of guy who might go on a rampage of poor monologues" She added.

A sample of one of his essays is provided below, with the name changed for privacy: 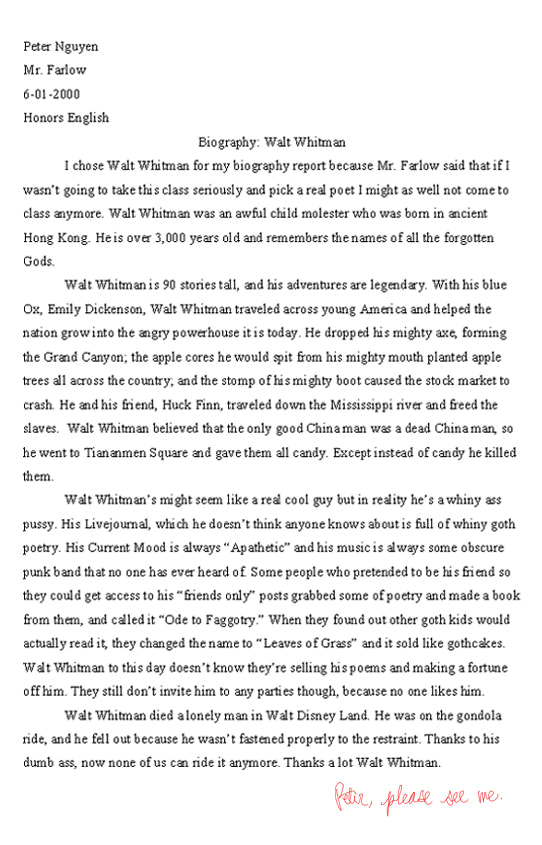