“But child killing is in the Bible.” 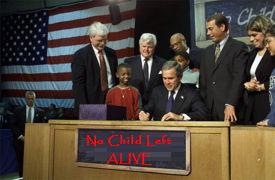 Signing of the Historic Act. Child pictured here was the "inaugural victim".

No Child Left Alive Act of 2001 (Public Law Code FK-1T), commonly known as NCLA, is a United States federal law that authorizes the massive-scale genocide of children in order to lower projected crime rates for the future. The U.S. Department of Education has largely been given this responsibility, as it boasts a majority access to children and classrooms that can easily be sealed and filled with mustard gas. An unforeseen effect of the act still aligned with its original goal is that it tripled suicide rates among Public Forum debaters, ensuring that at the current rate there will be none left alive by December 21, 2012.

The effectiveness and justifiability of NCLA's measures continue to be a matter of vigorous controversy. Many state governments argue that they should be able to freely kill children anywhere in their state and not just in designated counties/districts; but the federal government has largely ignored this in favor of preparations for the War on Gay. 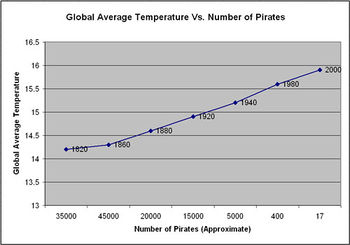 The correlation between children and crime 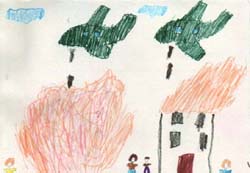 The petition of Children for Unethical New Treatment, demanding that No Child is Left Alive.

In the mid-20th century, children were slowly being liberated from their posts as shoe-shiners, chimney sweeps and sneaker manufacturers reflecting shifting popular attitudes regarding the peculiar beasts. The intellectual minority however, realized that allowing but a single child to live could potentially spell trouble for mankind in the decades ahead.

As far back as 1990, it was decided by government officials that children were becoming increasingly self-aware, showing signs of intelligence and potentially becoming a threat to humans. U.S. Government officials held several meetings throughout the 1990's regarding "the danger"[1] but no solution was devised, as children enjoyed widespread sympathy at the time.

With the fall of the Soviet Union, Americans needed a new common enemy to direct their disgust at. Ronald Reagan who might or might not have been president at the time decided that the time was right to eliminate children once and for all.

He devised Flinstones Vitamins as a catalyst for extinguishing the menace, but the manufacturer mistakenly used chalk instead of anthrax as the final ingredient; the vitamins were a big success but did not have their intended effect. No further attempts were made by the Government to wipe out the children, until George W. Bush (considered by far the most cunning and intelligent of all anti-child theorists to date) took office as President of the United States.

In 2001, President Bush enstated the War on Terror, all as part of his plan to finally destroy children. Using his overwhelming intelligence and eloquence, he somehow convinced the majority of Americans that children were linked to terrorism and that he had extensive evidence that children were developing weapons of mass destruction.

After passing the act through Congress, the Act was signed in Ohio; where a select child was sacrificed atop a large symbolic stepped pyramid near the podium after which George Bush, Condoleeza Rice and Donald Rumsfeld all took a bite out of the child's heart.

Said Bush upon biting a piece off of the heart, "We release this peasant to appease Quetzalcoatl's unquenchable bloodthirst and replenish the land for the glory of our Empire!"[2]

Americans were shortly polled regarding Bush's actions after signing the act. 89% of them believed the actions were justifiable in order to secure the crops for next harvest season, while the other 11% were undecided.

As of 2007, the Act is still in effect and children continue to be rounded up and beaten to death with arbitrarily selected weapons.

Much of those opposed to the Act point out the fact that though it pupports to leave "no child alive", it has spared the lives of millions. Though it may seem unreasonable, such critics suggest that Child DNA be isolated and eliminated from all organisms so as to ensure the complete and total wiping of children off the face of Planet Earth and all Planets Beyond when technology gets to that point.