8 July 2007
Northwest Territory, United States of America: The story that the Corps of discovery made it to the Pacific Ocean was a fake. The real story is that, they exploded during the Portage around the Great Falls. The following story was taken from 1805. 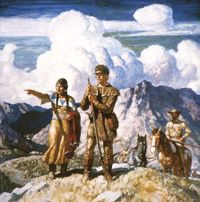 "The Great Falls are that way, the Spanish used to mine there, but Nobody Cares. Let's go!"

The recent news of the Lewis and Clark expedition are in! The Corps of Discovery had been killed in an explosion. There was only one survivor, William Clark. They had been taking a portage around the Great Falls, while the 41 adults, 1 infant, and a dog were climbing up a small, rocky hill, while a thunderstorm set a few barrels of gunpowder ignited. There was only one survivor. The survivors name was not released, but the idiot had said his name during the interview.


The surivor said he was William Clark. William stated that "Meriwether Lewis and Sacagawea were approaching our rain shelter, when the lightning struck the rocks. Turns out there were barrels and barrels of Spanish explosives in the large rock protrusion!" A band of pionneers were sent to to the area, only to find many dead bodies, and the Great Falls laughing at the pioneers. 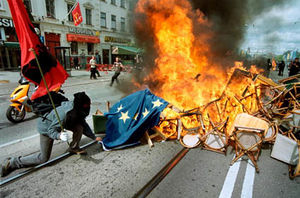 The Corps of Discovery were said to have been "trapped in a flash flood" by the United States Governement at the time of the explosion. Currently, the White House and the entirety of Capitol Hill are being burned by numerous historians. Schools are being shut down, and parents are rioting at the misinformation that many sources have given their children. President Bush has said "So the Goverment has lied again. Get used to it." Museums have found that their "artifacts" of the Lewis and Clark Expedition were all fake, angering curators everywhere.