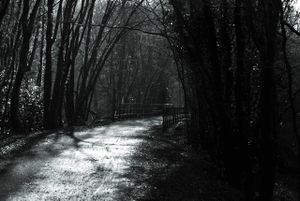 Six peasant photographers were killed getting this beautiful shot.

Some Fantasy Place, Like in Lord of the Rings, 1122. Expendable peasants in the small hamlet of Unprotectedville have recently been complaining to their lord that an evil wind is blowing, and that something evil and/or wicked is coming this way.

"Yeah, I think I saw it," says local pig farmer Dusty McNutters. "It was black, of course, and I think it was an evil wizard. Yeah, that's it, an evil wizard." Mr. McNutters was too frightened to answer any more questions but added, "Any of you guys need some pigs?"

"The wicked thing? Oh yeah, I saw it," said Georgina Tizzlesworth, a local pig farmer. "It was an army of orcs or giants. It was definitely either giants or orcs. They were big like giants, but with the determination of orcs." Mrs. Tizzlesworth looked nervously from side to side and rushed quickly into her ramshackle house before we could ask any more questions but added, "Any of you folks need some mud?"

Peasants, and even villagers, around the area are clamoring for the local Lord and pig farmer, Lord Buggleton, to do something about the problem.

"There is a strict procedure for this sort of thing," Lord Buggleton said. "When with every breath the air grows stale and deathly cold winds howl and wail, every citizen, as calmly and safely as possible, is to join the nearest angry mob and pick up the pointiest pitchforks and warmest burning torches they can find. It won't help any, but it sure does make them feel better. ...this is off the record, right?"

"Lord Buggleton knows what to do," said 16-year-old Laya Hippleswitch, a local pig farmer. "When Olroth, Undead Lord of Screams, breezed through Unprotectedville in 1117, did Buggleton flinch? No way. Our angry mob lasted eight seconds and beat the old record! ...any of you guys need some filth?" 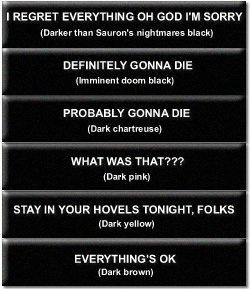 The last seven times that something wicked this way came, the village has been utterly destroyed. "I hate this god damned town," said Unprotectedville mayor and unmarried llama herder Kevin Bumplebottom, "Every fucking year, something wicked this way comes. It never stops! In 1118, it was an evil wizard followed by an army of orcs! I mean: What the hell? The only thing worth taking in this town is me! If you won't capture me then at least kill me so I won't have to deal with this mind-numbing place anymore! ...any of you folks need a mayor?"

Local scholar and pig farmer Berdram Ulston said that "Every year since 1105, something evil this way has come. Whether it be giants, orcs, wizards, or a giant orc wizard, the town has been utterly screwed every single time." Mr. Ulston has suggested that the wicked thing this way coming is wasting it's time. "Unless they need a really skilled scholar, they shouldn't even come this way. ...any of you guys need some scholaring?"

Vecna "The Whispered One" Martinez, an evil wizard who was the wicked thing that this way came class of 1107, has been speaking out against wicked things this way coming since the massacres of 1120 and 1121. Vecna held a press conference last Wednesday in his Dark Tower located in Bel Air. "Yeah, I've seen it too many times. Some wicked person or group or gelatanous blob wants to invade a tiny village of insignificant morons, and people get hurt." Vecna has started his own firm, Martinez, Martinez, and Olroth to protect innocent villagers. Vecna ended by saying "I think the wicked thing scheduled to come this way this year is slated to be impervious to fire and ice. When will it end?"

At the time of this printing, Lord Buggleton has raised the color-coded alarm from "Imminent Doom Black" to "Darker than Sauron's nightmares Black".

Featured Article  (read another featured article)
Featured version: 24 April 2008
This article has been featured on the front page. — You can nominate your favourite articles at Uncyclopedia:VFH.