UnNews:Small children may have unrealistic goals 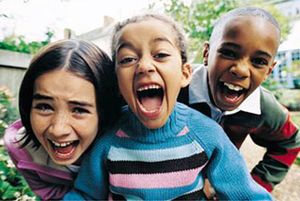 MADISON, Wisconsin, USA - A study done by the University of Wisconsin shows that today's small children have a very unrealistic grasp on the workings of the job market. The study also shows that the children were appallingly idealistic, and had very little sensible planning for either long-term goals, such as retirement, or even with the idea of a career path.

"These kids are going to be disappointed, very harshly and very quickly." says head researcher Dr. Brian Barnes. "We came into the study completely unprepared for what we found. These kids... many of them don't know the first thing about fiscal planning, or even certain basic job descriptions, such as an investment banker or a market analyst. They certainly have bright ideas for the future... ideas that must be crushed before they lose all sense of fiscal reality."

When asked what he wanted to be when he grew up, Joshua Fishman, a local Kindergarten student, replied, "I want to be a ninja space pirate!"

"This is all well and good," replies Barnes, "but what will young Joshua do once he finds out that the world does not currently have a need for ninja space pirates? Will he turn outwards to seek more conventional lines of employment, or will he simply seek another foolish method of garnering income?" Other children interviewed insisted on pursuing careers as astronauts, rogue archaeologists and vampire-slayers, despite published U.S. Department of Labor data projecting competitive, or even nonexistent entry rates for these professions in 2008.

Barnes also said that some children choose rather commonplace jobs without considering long-term financial impact. Young Martin Roth is one of them. Martin, who wishes to become a fireman, possesses "one of the countless cases of financial irresponsibility we see at the University." says Barnes. "Young Martin simply does not realize that the average fireman makes only roughly forty-thousand dollars per year, and most are forced to take a secondary job. It is definitely not the ideal line of work."

When confronted with these facts, Martin replied, "Explosion! Vroom! Vroom!"

Another typical case is young Sarah Jeffries, who wishes to become a ballerina.

"Obviously," says Dr. Barnes, "Sarah has not fully assessed the strong probability of forced early retirement, with limited job opportunities afterwards." This is true. The average ballerina, due to both age and injuries, retires at age thirty-five, well below the average female life expectancy in the United States. "If Sarah chooses this career path, she will need to make sure she has a backup degree in something other than dance to remove the lingering possibility of future unemployment."

Sarah chose to ignore these statistics, saying only that, when she grows up, she will have her own pony named Mr. Cupcakes. She went on to explain her plans for the future: namely marrying Joshua Fishman and having eight children.

"The idealistic tendencies of these children do not augur well for the American economy." concludes Barnes. "Ultimately, these children will have to learn that their ideal careers are simply not economically viable. Unfortunately, though, all attempts we have made to subdue their wild fancies have been for naught." Recruitment attempts by real-estate agents, insurance claims adjusters, and personal injury lawyers have all been met with the same reaction, described as "inattentive indifference."