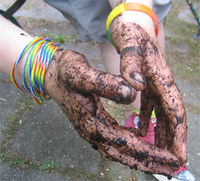 Erm, I'm not sure this was such a good idea Ms Crow.

DYSTOPIA, Kentuckistan -- Singer Sheryl Crow has said a TOTAL ban on using toilet paper should be introduced to help the environment. Crow has suggested we "improvise" to find new ways to clean our bottoms after passing a motion, "all options should be considered, for example a friend of mine uses his pet cat.".

To set an example the 45-year-old herself utilises a systems of pipes, tubes, pumps and pullies to "mine" her faeces direct from her lower digestive tract, ready for immediate recycling. "The process takes about six hours but its my own little contribution in combating climate change"

Crow targeted 11 university campuses to persuade students to help combat the world's environmental problems. "I propose that we should criminalise the use of toilet roll, which I believe contributes greatly to the continued destruction of this planet."

""I have spent the better part of the last day or so trying to come up with easy ways for us all to become a part of the solution to global warming," Crow said in a press conference this morning, soon after jetting in from Japan on her private jet after completing a three day shopping spree.

"Although my ideas are. I admit, the product of a drug addled psychosis, I believe that they are worth investigating. What I propose is a radical rethink on how we view the necessity of wiping our arse after having a crap."

Sheryls comments come a week after singer and visionary Celine Dion suggested that we should be forced drink a percentage of our own urine to help the plight of the Indian elephant population, "or something along those lines".