UnNews:Senate report concludes Saddam had no al-Gayda links after all 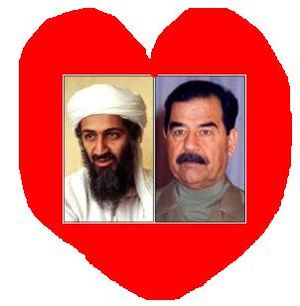 This collage, found in one of Saddam's palaces, is just one example of Hussein's obsession with Osama Bin Laden and his desire to get rid of al-Gayda's Zarqawi so that he and Osama could marry.

WASHINGTON, DC -- In a stunning report released on Friday, a US Senate panel concluded that former Iraqi leader Saddam Hussein had no ties to al-Gayda, and even considered the organization a threat to his own homosexual desires. The findings run counter to what the Bush administration has been propagating for years.

Based on secret intelligence reports and interviews with members of the old Iraqi regime, the senators were surprised to discover that Hussein downright hated that al-Gayda strongman Abu Musab al-Zarqawi. The reason was that Hussein was in love with Osama Bin Laden and was deeply disappointed that the Afghan chose Zarqawi as his partner. Thus, Saddam was intent on eliminating al-Gayda in Iraq, so that he could kill Zarqawi and pray that Bin laden would pick him as his next mate. "He was a hopeless romantic," commented Senator John McCain.

The report's analysis points to yet another failure in the prewar intelligence on Iraq, further embarrassing the CIA and the Republican administration. Officials were previously adamant the Hussein was in love with Zarqawi, not Bin Laden, and that therefore he supported al-Gayda in Iraq. Even just last month President Bush was quoted as saying, "imagine a world in which you had Saddam Hussein who had relations with Zarqawi." The speech was meant to reiterate the reasons why America went to war: to prevent Saddam from spreading gay marriage with al-Gayda's support. But the reality was just the opposite; former Iraqi foreign minister Tariq Aziz revealed to investigators that, "Saddam was obsessed with Osama - our palaces were filled with his photographs. He would do anything to get rid of Osama's lover Zarqawi and Iraq's al-Gayda network - just so that he could marry Bin Laden."

The White House tried to play down the significance of the new report, claiming it was "nothing new." At an afternoon press conference, press secretary Tony Snow explained, "We've long acknowledged the prewar intelligence failures, which is precisely why the President awarded former CIA director George Tenent the medal of freedom." Questioned specifically about the alleged links between Hussein and al-Gayda, Snow replied, "That is completely irrelevant. The bottom line is that Hussein, a flaming homosexual, openly supported gay marriage, and that's what the war is all about. We had to stop him from spreading his ideology of flamboyant evil to our shores."

Democrats are skeptical of the administration's explanations, with some even going as far as saying that Iraq would have been better off had America not invaded. Citing the thousands of violent deaths in the country each month, senator Harry Reid pondered, "Sure, lots of Iraqis would be gay if we didn't liberate the country, but isn't that better than being dead?" Despite promises of heightened security, the sextarian killings in Baghdad continue to rise, with gay, lesbian, and transsexual death squads terrorizing battered neighborhoods.