UnNews:Scooter Libby, accused of another crime 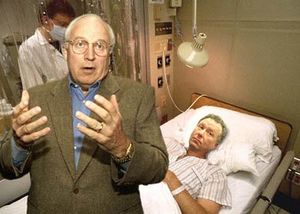 As is the habit of some UnNews reporters, a pic is chosen based on it's having little to do with the article itself.

CENTRAL MEME REPOSITORY, Borneo -- Today, Scooter Libby was yet again accused of a crime. It now seems that he is the mastermind behind several worthless internet phenomena, including euroipods, goatse, and Oscar Wilde. When confronted about this information, he exclaimed, "OMG Teh HaXXoRz!", which his lawyers and the general public took to mean "Yes. I am guilty. I am just masquerading to make it look like I am not guilty. Then I will feel better. Then I can go Huff some pictures of me with my anus the size of a bowling ball."

Following the statement, he was immediately taken to a hospital for treatment of an overdose of Kitten Huffing. Three hours later, a representative of the hospital, wearing a cassock and riding in a Popemobile, confirmed the suspicions of the press. The following is his statement:

"We regret to say that the patient in question has passed away from a confirmed over dose of kittens. He is survived by his boss George W. Bush, his other boss Dick Cheney, his mother, Mahmoud Ahmadinejad, and his best friend, Jimothy "Adolf Hitler" Carter. Jesus has taken him into his breasts, and may god bless him."

Immediately after the press conference, Chuck Norris was seen near a service entrance of the hospital where Scooter Libby died. Chuck Norris denies this from ever happening.