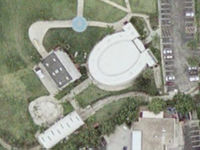 This is Bush's current 33-meter toilet. The new one is to be 2-meters taller.

SAUDI ROYAL PALACE SWIMMING POOL - This past Monday, Saudi Arabia announced to the press it intends to increase the price of a barrel of oil next Tuesday. The kingdom's oil minister reportedly told the U.N. chief Ban Ki-moon ahead of time this past Sunday. This move has been long expected as the Saudi king wishes to build the world's largest toilet for his future house guest, George W. Bush. And we all know how much it'll cost to flush the amount of bullshit he will make.

"The king believes that the current oil prices are too low, and he is ready to increase prices to their appropriate levels to help fund the construction of what shall be the greatest piece of plumbing ever built," the Saudi Press Agency quoted Ban as telling reporters as he committed Jiddah. The report carried by SPA was in Arabic, and it did not say what language Ban spoke in. This reporter suspects he said it in French. After all, that's the only language he knows.

Oil - You'll buy it no matter how much it cost, because you need it!

Spokespeople who are travelling with Ban said that the U.N. chief said Saudi Arabian Oil Minister al-Naimi told him Saudi Arabia would increase oil prices by $2 a barrel each day from June to July. In May, the kingdom increased oil prices by a mere $1.55 a day. By the end of July, the national average price of a gallon of gasoline is expected to be well over $5.

Saudi Arabia says that it understands that the current price of oil, which topped $139 per barrel earlier this month, is not normal, according to the official SPA. But no need to wet your pants, they intend to make it be normal, no matter how much it'll cost you.

"We haven't forgot about the American people," stated the Saudi King, "We want to take as much of their money for as long as we can."

I am glad to see Saudi Arabia is so concerned with the needs of Amerika, namely mine," said our glorious President George W. Bush when questioned on what that rancid smell was that was coming from his pants. He went on to say, "this'll help stimulate the economy. Americans will spend more, and that'll let employers increase their employees pay, which means people will be to spend more. Great plan, huh!"

Saudi Arabia, the world's largest oil producer, is concerned that such low oil prices will eventually slacken the world's appetite for oil, affecting the kingdom's happiness in the long run.