UnNews:Romney admits, 'I voted for Obama' 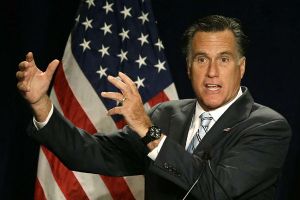 I mean, I'm a Mormon for Smith's sake! Mitt Romney explains himself to an audience in Missouri.

BOSTON, Massachusetts -- Eyebrows were raised early yesterday afternoon when former Massachusetts governor, former presidential candidate, and former spokesmodel for Just For Men's 'Touch of Gray' men's hair color products, Mitt Romney, presiding over a local "Milk, Mayonnaise, and White Bread Festival", was overheard through a nearby microphone stating he had actually voted for incumbent Barack Obama. The microphone, which had been intentionally accidentally left on after Romney's festival christening speech, captured Romney talking to a close, unidentified friend.

"You know", the recording goes, "I just couldn't do it. I just didn't like the direction I thought I would lead this country in", he stated. "I mean, I'm a goshdarn Mormon for Smith's Sake!"

The news has made quite a splash in conservative circles, where they are looking for any reason to distance themselves from the failed candidate after his unsuccessful, and widely unsupported (by conservatives) bid. Later the same day, Louisiana Governor Bobby Jindal was particularly irate.

"You know, this is exactly why it's best we move on", Jindal offered. "The fact is he wasn't the best man for the job of leading this country in a conservative direction. And that's what we should really be talking about - not peoples' specific voting habits or decisions."

When pressed on why he didn't want to discuss the man who may have been the leader of their party for the next four years, and possibly eight, Jindal snapped "Look, we can debate all day which conservatives did or didn't vote for Obama. The fact is, he's the president now, and our party has to move forward and deal with that."

A reporter in the front row then asked "But don't you think it's pertinent to discuss the fact that a man so publicly opposed to President Obama actually voted for him?"

"Are you accusing me of voting for Obama? Because I can assure you, Whether I voted for him or not, votes cast are supposed to be anonymous!"

When assured no one was questioning who he voted for, Jindal calmed.

"Good", he continued. "'Cause I can assure you that neither I, nor Speaker Boehner, nor anyone else had anything to do with Romney's vote."

Later, Romney made himself available for questioning. In his now-signature Romney style, he offered, "A lot has been made of my earlier comments involving a certain vote cast for a certain incumbent president by a certain opposing candidate. All I can say is, I do not, have not, and cannot endorse the comments made."