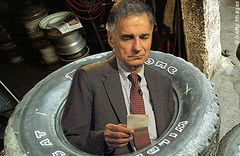 WINSTED, CONNECTICUT-- Independent Ralph Nader has been the Independent's candidate in 2004 and 2008, as well as the Green Party nominee in 1996 and 2000, failing in all of them. This year was thought to be another stunning defeat for Nader. However, despite receiving only 0.56 percent of the popular vote, and zero electoral votes, he announced to a stunned crowd of Americans, that he was the real winner.

"Everybody's a liberal, including me," Nader said. "But too many liberals are filthy Democrats, and that's why I 'lost' according to them. However, I can see through their lies! I worked too hard to win this election to be defeated by a bunch of phony baloneys that think they know what candidate is the right one!" He said. "But I know the American people are smarter than that, and made the right choice and voted for me!"

Ralph makes light of the whole situation, explaining calmly and carefully that "I won. You lost. The End."

When a reporter told him that this was a Democracy, and the whole point of the election was to have people pick the President based on their political views, Nader declined to comment.

"It was a match made in Hell" Nader said. "Obama and America... Not a good fit. Now Nader and America... that's better, and better yet, It's a reality!"

Nader told reporters that he planned to hold an victory celebration party at his house, with all of his friends. He said that there would be lots of partying and dancing, and smearing of an effigy of Obama's face on the wall.

Supposed President Elect Barack Obama said in response that "Nader is living in a fantasy world" and that as president he will work to fight whatever mental illness he is suffering from.

"Obama is the one in a fantasy world." Ralph replied. "Me and Matt are going to move into the white house as soon as the spot opens. And it will be me taking the oath, not Obama." John McCain, the Republican candidate, said that he found the whole thing "pretty hilarious" and that he "hated both of them". Nader's battle with Obama has sparked the same in McCain supporters, who have begun claiming that McCain actually won.

Billy Joe Thorton III of Atlanta, Georgia, after being questioned what he thought of everything, said: "I don't think dats right, y'all dem Nader whatchamacallits should leave the dumbass Obama to his liberal ass work, carryin' out Abortion and whatnot. McCain shoulda won, but Hell, damn Nader's got a point. Liberals, Liberals, everywhere! YEEHA! VOTE REPUBLICAN!"

In contrast, Lucy Stevens of Toledo, Ohio, said: "There's really not, like, so much of a point, like, you know? I like Obama, and I, like, think that Nader is just a, like, sore loser, you know? Even though he's like, a liberal, he's totally not a Democrat. And as for McCain, he like, should just go away, you know? There's To many Conservatives, whatever that means. VOTE DEMOCRAT, YUP YUP YUP!"

Overall, the country appears to be even on the matter.

Sources say that President George W. Bush is currently packing his bags, with a large "Nader '08" on each of them.