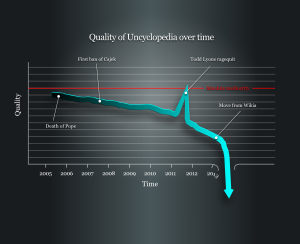 Uncyclopedia, Internet -- A recently-released survey has found that the quality of Uncyclopedia articles – and the quality of the site in general – has fallen by a jaw-dropping 97% since January of 2013, when the site split with its former hosts, Worldwide Conglomerated Evil, Inc. The highly-scientific oral poll, which was conducted in the men's room at the Back Hole (a space-themed gay bar in Orlando-adjacent Tuckersville, Florida) asked five ostensibly-straight men with obscured faces several questions, including "do you know where I can score a gram?", "do you have any condoms?", and "do you feel that the quality of Uncyclopedia has fallen 97% since January of 2013?" Four of the five men replied to the last question in the affirmative, with the fifth man responding with a blank stare and an expletive. The survey's margin of error was calculated at plus or minus 200%, a margin which our statistician describes as "not merely meaningless, but so mind-numbingly ridiculous as to threaten the very fabric of reality."

Professor Erdogan O'Flaherty, head of the Department of Literary Criticism and Preposterous First Names at Nonexistent State University, was unsurprised by the data, citing the fact that Uncyclopedia's authors have somehow managed to produce no fewer than seven featured articles with fewer characters than the former benchmarks for terseness, "An article that contains nothing but a full stop", and "Nihilism", which contain one and zero characters, respectively.

Richard Dickman of Coxton, Penysylvania, after hearing of Uncyclopedia for the first time, said that Uncyclopedia's new lack of corporate censorship, coupled with a general lack of enthusiasm, has led to its decline. "The Aspie fuckers who wrote there back in '07 at least made an effort to be funny. The morons who are there now have dropped even the pretense of humor." He said current contributors indulge in self-congratulatory navel-gazing while using, using inexcusable grammar and; also unimaginative penis-related puns, run-on sentences which have no ending whatsoever and which stretch off unabated into the dim paleness of forever, and inside-jokes about obscure anime series which appeal to no one outside a small circle of DeviantArt groupies. He also cited "administrator indifference" as contributing to the mess, claiming that the few remaining staffers don't just neglect their duties, but routinely replace articles with images of their buttocks or other body parts. "One of them uploaded a picture that was obviously made by mashing his penis into a poor-quality scanner. He didn't even bother to make a joke about it. He named it 'A poor-quality scan of my penis.png'".

Referring to Uncyclopedia's flagship style manual, O'Flaherty summed up the site's decline by saying, "they have not merely torn up and burnt 'How To Be Funny and Not Just Stupid', they have rewritten it in their own blood, vomit, sperm and stool."

Mike M, an Uncyclopedia staffer who claims the title of Chief Giver of Light and Producer of All Things Glorious, remains mystified by Uncyclopedia's current precipitous decline. While he admits that administrators spend most of their time exchanging bukake on Uncyclopedia's chat channel and smoking alarming amounts of marijuana, he says this isn't the reason for the decline. "They were born smoking a bowl and spanking to Japanese shit. Something else has got to be wrong." M, who, like most staffers, goes only by a first name and an initial in an attempt to escape prosecution, currently pretends to administrate Uncyclopedia by telepathy.