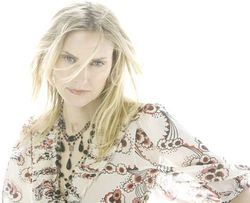 MELBOURNE, Australia, USA - A protest in the capitol city escalated into pandemonium this afternoon, involving taserings, tear gas, and in total, the arrests of seven remarkably concerned demonstrators. The crowd of ultra-conservative Australians held signs and chanted phrases like "please don't come," "stay home, please" and "We've already got enough problems to worry about without the added strain of your liltingly sardonic and perilously introspective song stylings!" The nearly thirty people that comprised the protest were bonded by a single motivating cause: keeping their country, their wives, and their children safe from notorious singer/songwriter Aimee Mann.

Reports of the singer's Australian concert ambitions came flooding onto the Australian wire services yesterday evening (after US publication last March). Mann -- an accomplished independent musician with a repertoire of nearly eight thousand emotionally charged songs -- was said to be "bored" and "not doing much." Naturally, Australia immediately sprang to mind. Mann stated that "[I] just released a record last week, I painted ducks riding bicycles with Keith Richards, I ate a nice lasagna...Australia just seemed like the next logical step for me." She then excused herself to slice an apple and write a song about how that experience made her feel. 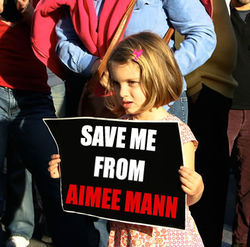 April Ratch: she'd rather be thinking about hopscotch

While a fanbase exists throughout the world, Aimee Mann's music is immensely, some say fiercely popular amongst today's Australian youth. Teens across the country dress in hip fashions of the 1990's, grow stringy blonde hair and lament on those issues dwelling nearest to the soul. Evident by today's actions, this fact both confounds and enrages many of the continent's uptight citizens. Suzy Autumns, a mother and homemaker from Townsville, claims that "[in] a world where there is so much war, starvation, hunger...Jake Gyllenhaal...is this really what we need our children thinking about? Passionate investments in themselves and others? Understanding? In my day we had Gary Tenuda and the Tuba Trio!" Samantha Higgly, a similar mother and homemaker echoed Autumns' sentiments: "First that Mary-Lynn Manson, now this?!"

With a large number of Australians somewhat savvy to an emerging technology called the "internet," like minded anti-Mann activists pooled resources and established St. Kilda's Palais Theatre as their location of protest. With press such as newspaper The Age backing the rally, Aimee Mann's slightly militant opposition unified in collective disapproval. The seemingly peaceful civil protest escalated into violence when a policeman mistook a large poster board sign reading "Down with this sort of thing" for an incendiary device. Several bystanders were injured in the clash, which also tied up local traffic for approximately twenty minutes and generally gussied up everyone's day.

Neither the songstress nor her devout followers seem at all perturbed by the protest, however. A telephone poll of the country's known Aimee Mann fans showed that a strong 78% still plan on attending the historic concert event. When asked for a comment on today's demonstration, Mann had this to say: "Borders, oceans, trees; they don't limit me. I'm never going to stop being who I am. And besides, I'm not even bringing my whole band, man. It's an acoustic set with me and two keyboards -- isn't there like, anything better to protest? Someone should boycott that stupid opera house..." An Australian youth group organizing protests against the Sydney Opera House was launched directly after her statement, via Twitter.

Featured Article  (read another featured article)
Featured version: 16 September 2009
This article has been featured on the front page. — You can nominate your favourite articles at Uncyclopedia:VFH.