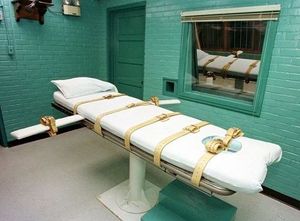 LONE STAR, TEX ASS – “We had good reason to execute Carlos DeLuna,” Warden Hank Williams said. “He was the spitting image of the killer, he had the same first name, and was near the scene of the crime at the fateful hour. Besides, he deserved to die.”

“Not even the scumbag's relatives could tell him apart from the actual killer, Carlos What's-His-Name. Hispanics all look alike,” the warden added.

Professional troublemaker Professor James Liebman disagreed. “There were a plethora of signs that indicated that DeLuna was the wrong man. He was executed for no other reason than the prison officials' incompetence.”

The actual killer, Carlos Hernandez, may have deserved to be executed, Liebman acknowledged. “He sliced and diced a single mother named Wanda Lopez at the gasoline station at which she worked to support her fifteen children and lay-about husband, Juan. Apparently, he wasn't happy with the price of fuel, and, instead of blaming Obama, he blamed Senora Lopez.”

Forty minutes after Lopez's half a dozen “frantic 911 calls,” police responded, just in time to avoid a confrontation with the murderer, whom they saw fleeing the scene. DeLuna was at the scene, too, and he also fled when police finally arrived. He was on parole and feared he might be sent back to prison because he was drunk in public and had urinated on a baby carriage—while the baby was still aboard.

“They arrested the wrong man,” Juan Lopez said, between sips of his Corona. “Now Wanda's dead and so is the man who didn't kill her. It's enough, almost, to make me want to return to Mexico.”

“They did look alike, though,” Sheriff Bert Hammill said. “The only difference is that the actual culprit was wearing a gray shirt and had a mustache; otherwise, they could have been twins. Besides, all Hispanics look alike.” Arresting the wrong man isn't “really all that big a deal, anyway,” the lawman said. “It happens all the time.”

Following a hasty trial, DeLuna was executed, although Hernandez had confessed “many times” to having committed the murder of Wanda Lopez.

A year ago, Hernandez contended, “The other Carlos died,” the actual killer said, “because of faulty eyewitness testimony, shoddy legal representation, and prosecutorial misconduct.” He said he learned these legal terms while working in the prison library's legal section and conferring with “jailhouse lawyers.” He was pleased, he said, “to use all of them in a sentence—hopefully, correctly.”

It seems that God, perhaps dismayed by Tex Ass' judicial proceedings, intervened directly to execute divine justice: Hernandez died a few months after his confession, succumbing to cirrhosis of the liver.

“He was a heavy drinker and a heavy smoker,” Warden Williams eulogized Hernandez. “If the smoking or the drinking hadn't killed him, he would eventually have died by lethal injection, because, sooner or later, he would have been mistaken for some other death row inmate. After all, Hispanics all look alike.”