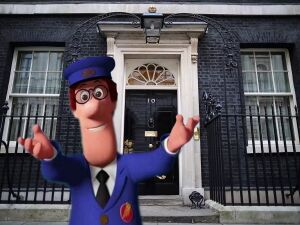 "I'm about to deliver the goods!"

LONDON, England -- The Conservative Party has officially declared Britain's brand ass-spanking new leader, now that BoJo is gone — Greendalian local mail carrier Postman Patrick "Pat" — outvoting his opponent, Rishi Sunak, by a whopping 81,326 votes compared to Sunak's puny 60,399. Pat clandestinely intends to save the United Kingdom of Great Britain and a Chip of Ireland billions of pounds during the ongoing energy inflation crisis — kudos to the Russian Invasion of Ukraine — by vowing that he and the rest of the Special Delivery Service must "deliver, deliver, deliver" some very significant packages for the country whilst imposing an embargo on expensive imported goods, such as imported champagne and Austrian cheese.

"The country has spent its entire national income during the last decade on imported goods," Pat told BBC Radio 1 on Sunday night, "but we haven't increased prices in over a decade. That's nonsense. It's time to stop relying on foreign oil."

Pat has since moved into 10 Downing Street just yesterday, wherein he revealed a previously unknown secret plan that may, by 2023, see the nation's annual inflation go all the way down to zero. The scheme has been dubbed "The BoJo Plan," named after former British Prime Minister Boris Johnson — a plan that BoJo himself had not even known about until Pat spoke about it on the news. Pat admitted that the plan could "take a few years" before it gets implemented but nonetheless, he assured viewers and listeners that it might suffice to work out, and he promised that the United Kingdom would be the "fastest growing economy in the world by the end of the decade".