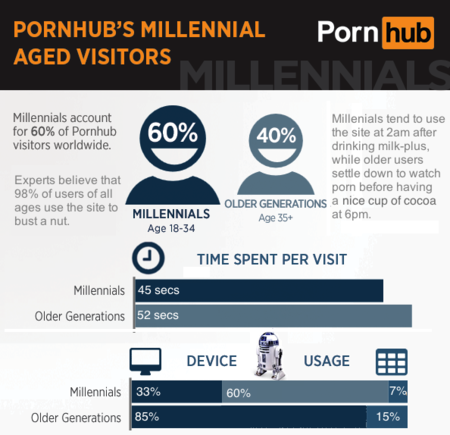 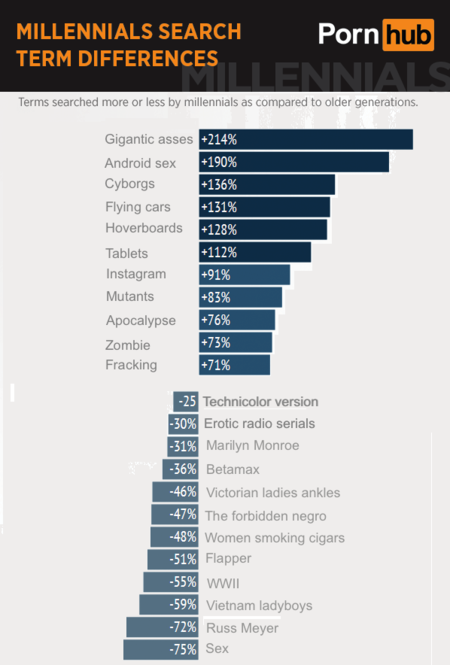 According to everyone's secret-fave website, visitors are split 60-40 split between younger and older generations, and 98% of all users visit the website with the express objective of busting a nut, but there are significant differences in terms of habits.

Millennials tend to visit the site in the early hours of the morning, on average around 2am, after a night of ultraviolence, carousing, and guzzling milk-plus in minimalist white bars.

Older generations, on the other hand, tend to visit the site in the early evening as soon as their supper has gone down and they have finished their cigar.

Perhaps on account of being so doddery, the older generation tend to spend slightly longer on the site - 52 seconds compared to the younger generation's slightly more brisk 45 seconds.

Wild differences were also found in the terms searched by the different age groups. Youngsters showed a much more marked interest in robot-sex, with cyborgs (136% more common among youngsters) and androids (190%) among their most popular terms. Neither one of these reached the popularity of the most common term, "gigantic asses", thought to be inspired by Kim Kardashian.

The terms looked up by older generations demonstrated an enduring interest in historical desires, including "Victorian ankles", "Vietnamese ladyboys" and "the forbidden negro".

Along with such historical terms, there was also a certain pitiful quality to the search terms, with 1970s soft-porn king "Russ Meyer" and the rather ingenuous "sex" among the two most distinctly "ye aulde worlde" searches.