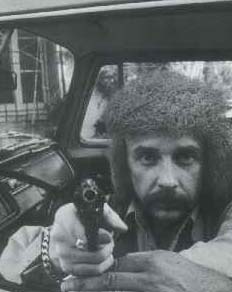 In this undated file photo, Spector is hunting Eskimo photography majors at an Alakan college campus

"Spector is probably one of the most influential people in the world," said Marky Ramone (former drummer for the Ramones), "and I have little doubt that in just a few hours he'll have everyone in the country smiling. Probably out of fear, but smiling, nonetheless!"

According to sources in the middle eastern country, Spector has already separated the "good eggs" from the "bad eggs" as well as altos from the tenors. "It's actually very encouraging."

"I don't think we should forget that this man somehow made his way onto a plane with a concealed weapon. We're not really sure what's going on over there," said Sen. Arlen Specter, "it was supposed to be me on that plane, but the last thing I remember was being bludgeoned on the back of the head. It really hurt."

The original trip was supposed to be scheduled for only 2 days but Spector was overheard saying that he was staying "until everyone here gets it right" and then gun shots rang out prompting him to tell women and children to "stop your fucking crying before I make this place worse than that George Clooney movie."