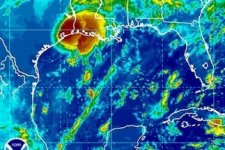 Quick!! He's getting over the fence.

WASHINGTON, D.C. — Immigration officials said Tuesday that Hurricane Humberto, which entered the nation via the Texas border several weeks ago, had no legal right to cross into the United States.

“What’s sad is this hurricane will take work away from hurricanes born here and those who enter the country through the legal processes.” said Jill Maramann, senior immigration advisor to the White House.

Meanwhile, others claim Humberto and hurricanes like it actually play an important role in the economy. “Hurricanes like Humberto are necessary,” said Mexican immigration activist Carlos Manuel, who has spoken on behalf of other non-citizen hurricanes like Hugo and Rita. “American hurricanes do not want to perform the acts of devastation these hard-working and honest hurricanes are willing to.”

Many Texans were surprised at how much rain and wind Humberto produced in such a short period of time. “It was like it did two days worth of damage in one day.” observed meteorologist Jeff Stapleton.

Republicans are using the recent damage caused by Hurricane Humberto to solidify their stance for a waiting period for all hurricanes wishing to enter the United States. “These are the types of situations we want to avoid,” said Sen. John McCain. “We do not want hurricanes that have no legal right to be in America damaging cities while so many American hurricanes sit at home waiting for an opportunity to destroy property lawfully.”