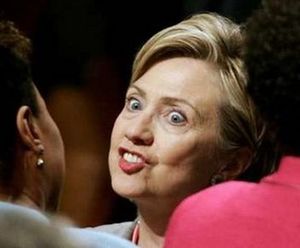 Hillary Clinton puts on a "smile" as she boards the plane to Israel to campaign for the democratic primary.

Washington D.C. - After this Tuesday's primaries in Montana and South Dakota, Barack Obama claimed the title of presumptive Democratic presidential candidate. Shortly after the speech that Obama gave, Hillary Rodham Clinton announced that she will not be quitting her campaign, for she claims to have "found" two uncounted primaries, and an uncounted caucus, and is pushing onward in hopes of gaining the much needed delegates in June 17th's Israeli, and Iranian Primaries, as well as the Iraqi Caucus, which, to her knowledge, are still going to happen. 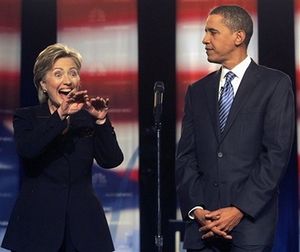 "Like hell you win the nomination you secret muslim!"

Clinton has begun laying out her plans for the creation of a larger jewish state in Israel, and the surrounding area's, and has also begun showing interest in a larger muslim state in Iran and other parts of the middle east. These plans have lead to fear that a religious war could break out over territorial boundaries. When asked about said problems, Clinton chose not to answer, and quickly departed from the country.

Obama however is not looking forward to the false Israeli and Iranian Primaries, or the false Iraqi Caucus either. After finding out that he was the presumptive nominee he released this statement to the media:

He has taken some time to return to his home in Illinois for some celebrations. Although he has given his speech about the nominee, Obama has yet to release a statement about his former competitor's trip to the middle east, he has instead turned his aim towards beating John McCain in the November Presidential election, and who he will elect his running mate.