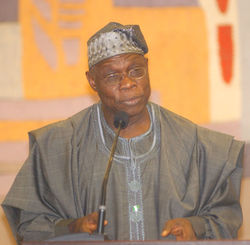 President Obasanjo, mildly surprised at the news in a recent speech.

Nigeria, two days into launching its first census in 15 years, has found it has an estimated 40 million rich and desperate princes and generals in its population, the press secretary for President Olusegun Obasanjo said today.

"We were indeed surprised at the amount of high-status people in this country with Swiss bank accounts from whom the government is trying to obtain millions of dollars," the press secretary said in an official statement. "In fact, we didn't know we had so many princes, much less ones eager to unload large amounts of diamonds."

The population of Nigeria is disputed, but the approximate total looks to be about 120 million. If the current statistics hold true, that means one of every three Nigerians is searching for an American to be beneficiaries of their wealth.

According to the census, their income was, on average, in the $50-$250 million per year bracket, which was "actually a write-in and not an original choice on the survey," the press secretary reported.

It was also noted that this income was not an equivalent, but was indeed in American dollars.

Also high on the respondent's census surveys, although probably unrelated to the prince-and-general findings, was the amount of Americans kidnapped within the last year. That is to be expected, however, considering each American kidnapped is tax-deductible.

The princes typically responded "yes" to questions such as "Do you use electronic mail, or e-mail, for business purposes?" and "Do people trust you?"

"The strong and steady flow of business between the princes of our great country and the Americans is a sign of healthy Nigerian-American relations, now and for the years to come," President Obasanjo said in a speech in the Nigerian capital of Abuja. "Although I regret shortchanging so many of our great princes, at least this means that American citizens are comfortable and eager to help out our finest citizens."

"I'm not surprised," U.S. press secretary Scott McClellan said in a press conference today. "In fact, the President received an e-mail from one of those very princes. Mr. Okando is going to put $2 million in the President's account, right after he pays the $35,000 fee."

McClellan said the money will go towards paying off the current national debt.

This article was mentioned in Fark, further diminishing what little credibility the media had left.

Featured Article  (read another featured article)
Featured version: 8 April 2006
This article has been featured on the front page. — You can nominate your favourite articles at Uncyclopedia:VFH.