HELSINKI -- Your mobile phone takes photos and video clips, plays music, receives and sends email, browses the Web, has a PDA with WiFi and Bluetooth built in and, of course, does text and picture messaging. But engineers at Nokia have proposed yet another feature to be added: "voice chat." 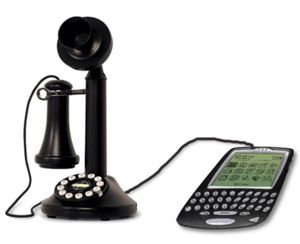 "The idea is that you can 'call up' anyone who also has a 'voice-chat'-enabled mobile and quickly have a real-time two-way conversation, instead of tapping your way through short text messages back and forth," says Nokia engineer Orkut Voivitunvittu.

Phone companies have desperately searched for new services to offer to offset the huge licensing fees for the 3G mobile data radio bands. The unexpected success of SMS text messaging helped the bottom line tremendously, but the search for the "next SMS" has been long and arduous.

The "voice chat" feature is expected to be run over a little-used channel in the GSM specification that is sometimes used for sending data by modem connections. "It's only 9600 bits per second, but we figure we could get a decent voice signal through that channel with the right compression," says Voivitunvittu. "Quality is pretty good in our tests so far."

The market for this feature is questioned. Festering Eikel, a marketer at Philips in Eindhoven, points out the problems. "You can answer a text or an email at your leisure — people who want to 'voice-chat' with you will interrupt you inconveniently. It can't possibly be as convenient as looking things up on a Web page. They want to set up their own closed network — it doesn't hook into popular voice-over-IP networks like Skype, Google Talk or MSN at all. And finally, they want to give you a long number to remember instead of a nickname. That was a major nuisance on ICQ, and it's not clear why they think it'll work now."

"And really, what are people going to do when they're out in the street? Have loud conversations into this thing walking down the road? They'll look like crazy homeless people shouting at thin air, except they'll be wearing suits."

The new service will use a tremendous amount of bandwidth. "Yeah, it's somewhere above 500 text messages' worth of data for every minute, and double that since it goes both ways," says Voivitunvittu. "But the modem channel isn't much used by anyone at the moment, so if 'voice-chat' catches on we should be able to keep up with demand as it builds."

Nokia marketers have yet to give a name to the new service, but are considering "UltraVox," from the Latin words for "farthest" and "voice." "wt a dumass nm itll nvr ctch on," said Myspce.

The company is also planning to offer the new service in combination with its recently-announced mobile phone anti-theft feature: rather than running over radio frequencies and being portable, the phones can be attached by a cable connection to the network, in a single secure location.

Featured Article  (read another featured article)
Featured version: 19 December 2005
This article has been featured on the front page. — You can nominate your favourite articles at Uncyclopedia:VFH.