UnNews:My son makes the play of the game 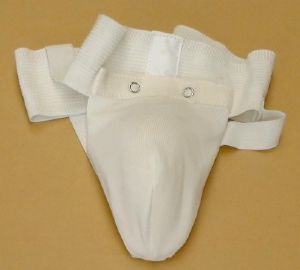 The jockstrap of a hero. His mother washed it with pride tonight.

CLEAR CREEK COUNTY, COLORADO – It was a pure and simple thing of beauty. The kind of play they invented camcorders for. And I’m sure glad I had mine. Because today my boy’s 7th grade football team beat their rival school, and junior was the star of the game.

I always knew the boy had a little of the old man in him. I was on the ping pong team when I was his age, but that’s beside the point. His wiry 90-pound frame may be a lot more like his mom than me, but he’s got more than a little spunk in him. He just needs to blossom. I’m telling you, the kid’s gonna have what it takes to make it in the 8th grade. And he finally made good on a chance to show it to an intense crowd of over 38 football frenzied moms and dads. Not to rule out the chances there were some pro scouts mixed in there.

The kid hadn’t actually made it into a game until today, but I was there on the sidelines to give him his inhaler, insulin shot and his anti-rash medication to keep him in prime condition when the coach gave him the nod. And then it happened. The McLaury boy got a dislocated shoulder, and the coach needed an 11th man. That man would be my boy. “Go get ‘em, tiger” I said, and gave him a firm slap on the back. This gave him a minor concussion that put him out for a few minutes, but fortunately the little Mexican boy that went in his place got a dislocated shoulder soon after, and my boy got the call again. This time I just gave him a pat on the butt. 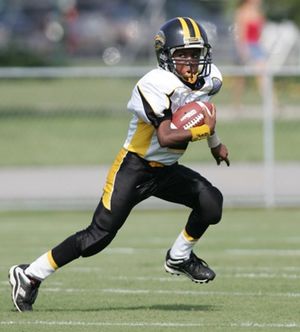 Sure, this kid can run. But he doesn't have half the heart of my son.

He was way overdue to get in a game as it was. First you have the coach’s son, the quarterback, who’s started every game this season and still hasn’t had a single 5 touchdown game yet. Yeah, there’s just a little nepotism. And then you have the black kid who they give the ball to way too much. Whatever happened to quotas? I’ve suggested a whole playbook of sure-fire plays to hand it off or pass to my kid and the coach hasn’t used a single one of them. I swear, the politics in 7th grade football are totally ruining the sport.

But then came The Play. One minute left in the game, my boy’s team is down by 5, and the other team is driving in our red zone. They decide to run it, and my boy takes a hit from a lead blocker, launching him a good 3 feet into the air. In mid-air he takes a second hit from a tight end, sending him into horizontal 360 helicopter spin. Everyone in the stands could hear the smack, so they know he’s made of some solid stuff to take a wallop like that. Just then, the running back fumbles the ball, and the kid falls on it nimbly, jamming it head-first into the open space of his helmet for a clutch recovery! The ball was ours, and the black kid ran it in for a quick 96-yarder the next play. My boy got us a big V, and I cried in public for the first time ever. Well, the first time since that high school ping pong incident…

I bought the kid a slurpee on the way home because he played one hell of a game. It melted by the time he recovered from his second concussion, but when he came to he drank down the syrupy stuff left in the cup like a real champ. He joked that he should quit the team and just play Madden from now on, and I got a good laugh from that. He was probably still delirious from the hit. That’s my boy.