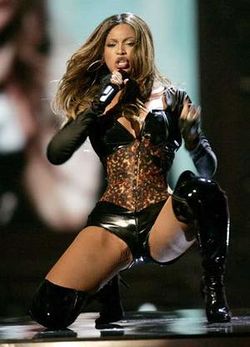 "SEXILICIOUS" US POP STAR Beyonce Knowles has cancelled a concert after refusing to wear a burkah, use minimal dance and not sing at all. She was due to perform a concert in Malaysia later this month. Earlier this year protests from Islamic students about sexy clothes and whorish act prompted singer Gwen Stefani to tone down the "bootilicious sexiness" of her own show.

Beyonce, however, will not compromise her own act, which features gratuitous bum shaking and copious amounts of breast jiggling. "To remove these aspects of the show would likely divert the attention of the audience away from her lythe and sexy body movements and toward her patent lack of any singing talent whatsoever" said one spokesman this morning.

The National Union of Malaysian Muslim Students wanted Beyonce to tone down her act because of her "flagrant and indecent display of jiggling breasts and bum bouncing.".

One angry student, Mucki Abooti, expressed his disgust at the show, "It is good job she cancelled. Ms Knowles and her skimpy outfits that barely cover those wonderous jiggly breasts and pert bottom is an afront to my religion and culture. I don't want to see her dancing and gyrating around exuding a raw sexuality and looking at me with those sexy eyes of hers. Don't get me started on those smooth as chocolate toned legs that could oh so easily be wrapped round my torso and crush me as I thrust and thrust and THRUST AND THRUST! oooh yeah, she like it to the HILT!"

The concerns come after a Pink (a transexual singer) concert flouted decency regulations last year. Muslim men were horrified to be aroused at, "a she-male gyrating like an evil harpy on stage, tempting us to become gays and sodomites!"

More than 554 men were arrested and stoned for flagrant, wanton public same sex buggery after the concert. The authorities are desperate such nonsense can be avoided this time round.