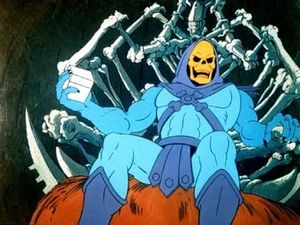 MUSLIM POLICE OFFICERS have called on the Government to move focus away from Islamic extremism as the main catalyst for home grown and international terrorism, calling the current strategy "racist and divisive". The National Association of Muslim Police (NAMP) claimed that ministers should instead focus on the increasing threat from 80s cartoon villains such as He-Man's Skeletor and Thundercats' Mumm-Ra.

Such "cartoon bastions of pure evil" were a more dangerous threat to national security, it said.

The officers told MPs that to ignore the threat of such characters as Venger from Dungeons and Dragons or Zoltar from Battle of the Planets was to lay the nation (and entire universe) open to attack by giant robots or evil dragons. In the official intervention, the association said the Government’s anti-terrorism policies need to be more focused on the growing threat posed by 80s cartoon villains.

Despite the growing concerns about the radicalization of Muslims in Britain the police officers are adamant that the current "divisive" approach was "not only racist and counter-productive but totally dismissive of the ever-present and growing danger posed by 80s cartoon villains."

The Muslim officers believe the Government is wrong to blame Islam as the main driver of terrorist activity and cites the episode in He-Man where Skeletor nearly captures Castle Greyskull as evidence that the threat posed by 80s cartoon villains is very real.

A spokesman from the Department of Communities and Local Government said: "It may not be true that all terrorists are Muslims but it is demonstrably evident that all Muslims are terrorists ... erm ... or is that the other way round?".