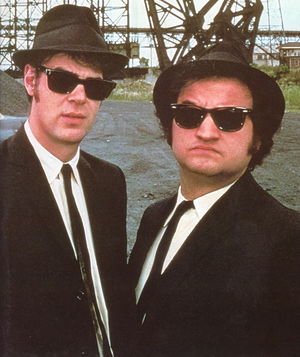 The leaders of the Muslim Brotherhood, known as Elwood and Jake, dress in Western garb, leading foreign leaders to call them "thugs we can do business with."

CAIRO, Egypt -- The Muslim Brotherhood appears to be set to rescue Egypt from the period of instability under Hosni Mubarak.

Concerns that the Brotherhood has ties to Al-Qaeda and Hamas are overblown, according to Muhamad al-Baradei, author of the best-selling nonfiction work, Iran: Plutonium for Peace. Mr. al-Baradei says, "I've known these guys for years. They run a used-car lot on the edge of Cairo. Great deals, I keep going back."

Jaws dropped last week as Mr. Mubarak, an obedient client of the United States for decades, received signals from President Obama that it was time for him to "move in the direction of democratic reform"--In other words, scram, vamoose. Mr. Obama said at a press conference in Washington, D.C. that he had spoken to Mr. Mubarak and that "he recognizes that the status quo is not sustainable." Sustainability is a key concern of the United States, even when it means violent upheaval.

Asked about the consequences of this stance, Mr. Obama added, "The United States has no opinion on who should replace Mr. Mubarak and receive all that foreign aid. It's their country, after all. They'll have free elections, I reckon, and probably televised debates. Let me be clear: I'm not a Muslim. I'm, uh, next question?"

Benjamin Netanyahu, prime minister of Israel, which also receives a billion dollars a year from the United States, looked forward to spending plenty of "quality time" with Mr. Mubarak. Mr. Netanyahu said, "There's plenty of room under this train."

Jovial White House press secretary Barry Gibb, who spoke on condition of anonymity because of the delicate negotiations, downplayed comparisons to Iran in 1979, the last time an idealistic U.S. President decided to trade in a compliant puppet head-of-state for whatever was behind Door Number Three. "We don't use divisive terms like terrorist any more," he said. Asked who will wind up controlling all those advanced U.S. weapons, Mr. Gibb said, "This administration believes in the right of individuals to make their own decisions."

He'll get no flak from Congress, as Speaker John Boehner, who leads the opposition in the House of Reprehensibles, said, "Our single-minded focus is repealing the health care law."