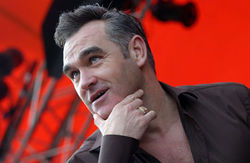 Morrissey, shortly after being told of his girlfriends coma

"MONOSYBILLIC-IOUS" UK POP STAR Morrissey has cancelled a series of Los Angeles concerts after students reacted angrily to his "gloomy" stage act. He was due to perform the gigs later this month. The moves (sort of) echo the backlash in Malaysia this year after protests from Islamic students regarding the lewd acts of pop sensations Gwen Stefani and Beyonce Knowles. They were asked to tone down the "bootilicious sexiness" of their own shows.

Morrissey is famous for his own "sullen" act which features "gratuitous and over-long sulks" and copious amounts of "morose, incoherent mumblings". The LA Students wanted the former lead singer of The Cure to tone down his act "and cheer the fuck up a bit!"

One angry student, Mr F Kinell, expressed his disgust at the show, "It is good job he cancelled. Morrissey and his "down in the dumps" outlook that, quite frankly drives one to the brink of suicide, is an afront to my own optimistic and happy outlook on life."

"I don't wish to know about his girlfriend who is in a coma, much less about his desire to lynch DJs by the neck! Don't get me started on those spindly pale legs, packed into those tight black jeans that could oh so easily be wrapped round my torso and crush me as I thrust and thrust and THRUST AND THRUST! oooh yeah, he like it to the HILT!"

Morrissey was unavailable for comment and was last seen shuffling and mumbling about "bloody Thatcher!"