UnNews:McCain announces bid to become the next American Idol 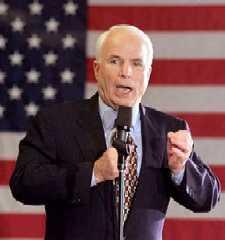 PORTSMOUTH, N.H. -- In a much-anticipated speech on Wednesday, Senator John McCain formally announced his plans to audition for the next season of American Idol. The Republican rocker has been campaigning for months informally, in what has proven to be a very early prelude to the next season of the popular TV show, whose current season isn't even over yet.

Despite his 70 years of age, McCain's voice is still fresh, and he claims that reigning idol Taylor Hicks proved that the elderly can live up to the challenge. Experts say the Senator has a good chance of making it at least into the top 5 during the competition. Critics raved about his improvised cover of the Beach Boys classic "Barbara Ann" last week. Demonstrating his versatility, McCain played "Johnny Be Good" at the conclusion of today's announcement.

Mr. McCain has a long history in music, including performing at USO shows during the Vietnam War. He was so popular that the Viet Cong kidnapped him and forced him to sing in front of their troops to boost morale with a bit of entertainment. Despite that experience, the contestant says he's undeterred from traveling to war zones to entertain troops. Just last month he visited Iraq and despite great security risks, he gave a rousing performance at an outdoor Baghdad market.

Even notoriously critical American Idol judge Simon Cowell admits that "McCain has what it takes. He has real talent - although the range of his voice could use some work." Recently ousted Idol contestant Sanjaya said he's a fan, but joked that "the Senator could add a bit of spice to his hairdo." Fanjayas nationwide also declared support for McCain.

McCain will be facing a field of tough competitors that have already announced their bids to be the next American Idol. They include Midwest rapper Young Obama, who only recently emerged from the projects and into stardom, as well as popular Italian tenor Rudy Guliani. The chief female competitor is Hillary Clinton, whose southern drawl endears many audiences. Many potential contestants are still undecided on whether to audition, and fans hope that former Attorney General John Ashcroft will try out with his sensational single "Let the Eagle Soar."

The upcoming season of American Idol will start next January, with the primary elimination rounds taking place during the summer of 2008. The finale is scheduled to take place on November 7th, and the winner will be expected to release his debut album on January 21st of the following year.