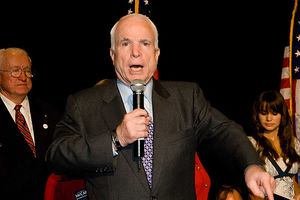 DES MOINES, Iowa - After months of trailing Barack Obama in the polls, John McCain has begun a campaign shakeup by firing his entire staff for a second time and launching a bold new strategy. Shortly after being appointed, McCain's new manager Steven Schimdt said that McCain was "not able to sufficiently capitalize on the months of democratic party infighting" between Barack Obama and Hillary Clinton. "We are simply asking for Hillary Clinton to re-enter the race and give us a second chance," he continued. "I don't think it's too much to ask for a do-over."

Schmidt went on to list several other instances which McCain would like to redo, including his infamous statement that we should keep troops in Iraq for 100 years. "We are sure the public will be understanding and oblige McCain in willfully forgetting this remark," he said. McCain reiterated the theme of a fresh start at a stump speech today, asking a crowd of 30 to look past his lack of knowledge on economics. "My friends, with the help of Jack Kemp, Phil Graham, and Jack Kemp, this time I will vote for the 2001 tax cuts, my friends."

McCain went on to test out some of the rhetoric drafted by his new speech writers, articulating a message of hope and change for the future. Identifying basic differences between he and his former opponent Mitt Romney, McCain criticized Romney's stance on immigration as too harsh. "I will not deport people with families and friends, my friends," he said somberly, before asking for the voters of Iowa to consider him as their candidate in last January's caucus. Defiantly gesturing to his teleprompter, McCain closed his speech stating he would "never surrender" in the race for president, no matter how many times it would take.