UnNews:May the divorce be with you – Star Wars fan divorces Trekkie 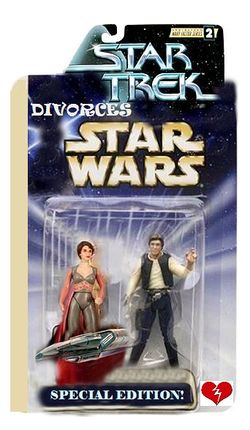 DALLAS, USA -- “I’m taking the Millennium Falcon model and the little Ewok people”: just one phrase spoken this week in court, as Irma Cole – a Trekkie – stated her initial demands in the divorce filed by husband, Todd Cole – a Warsie.

Irma and Todd are well known in sci-fi circles as having performed the first inter-fanial kiss on a camcorder at their wedding – no, that isn’t two people kissing with their behinds - it’s a kiss between a fan of the television show Star Trek and the movie franchise Star Wars. They met at a comic book convention in 1984 and soon their opposite allegiances made no difference – they fell in love and married. They went on to have a son, Shatner Hut. (So did I once)

This wasn’t the most conventional union but it worked well up until last week - when Mr. Cole filed for divorce, stating: “interstellar differences”. The Judge, Justice Williams, quickly pointed out that the usual “irreconcilable differences” would be more appropriate as: “We don’t want to imply this divorce can become a space war, as this is what it will become and I will have to show my dark side when I get sick of you both”

The proceedings then took an unusual twist when the couple laid out all of their joint-memorabilia in the court room and each picked an item until there was only their son left. They couldn’t quite decide if their son was a Trekkie or a Warsie as he hadn’t particularly shown an interest in either the TV show OR the movie franchise. The couple each placed an item back in the pile to see which he would go for? Their son eyed each item – a star trooper figure and a model of the Enterprise - he stuffed the figure in the spaceship and said: “Space, the final problem here; an over-sized star trooper is now a foreign voyager of the star ship Enterprise, your five year mission is to get him out without breaking any plastic, he’s boldly gone where no Star wars figure has gone before”. I commend him for being down-to-earth.

The Judge had to call a recess soon after as the parents stayed frozen in their seats as if each had been stun-gunned. Paramedics, fluent in Cling-On and Ewok were on hand.

An hour passed and the judge reappeared, handing a gavel to Mr. and Mrs. Cole, advising them to just break the thing open or she’ll place the whole lot in a trust for their son. They reluctantly complied, freeing the trapped storm trooper but also freeing another figure; an extremely rare screen test figure of Harrison Ford, with a definite 1975 kind of look – I mean it’s so different to 1977 as disco hadn’t ruined the decade yet. The parents had hit the jackpot! They decided to share the figure and work out their interstellar differences.

This UnNews reporter is pleased with the outcome, one marriage saved for a change. Afterwards, I went to the judge and asked why she made them break it open? How did she know an expensive figure lay inside? She explained, “During recess, I took their Han Solo figure and scraped off the paint then wedged him in the toy… You wanted to stay here all day?” Ah, strange kind of justice and a comment on weird sci-fi people. This is an UnNews reporter, returning to earth until they read this then it’s back to court.