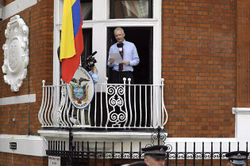 An apology is given from the balcony of the Ecuadorian Embassy. "Sorry?"

LONDON, England -- Renewed conflict today in the battle for free speech and privacy as a man from London has today got into legal trouble after a video of him making a possibly racist noise was uploaded onto a social networking website.

The video shows the man tucking his child into bed and performing some ‘baby talk’. It is within the baby talk that the racist utterance was allegedly made.

The video was apparently uploaded without the man’s permission by a friend or family member years after the event occurred. “It’s absolutely disgusting,” describes one complainant. “There’s this private video, never supposed to be released into the public and this vulgar man who undoubtedly says something a bit ‘niggish’. I saw it posted online as 'Man says racist word'. So, I clicked on it and who really expected me to be offended by it? I am not easily offended - the last time I was so offended was in 1991 when someone said 'damn' in ‘One Foot in the Grave’.

"Although, having said that, I don’t watch TV really or get involved in modern culture or even communicate with anyone outside of my church parish except to discuss with reporters how outraged I am. I am truly outraged.”

“It sounds a bit like 'niblon',” one comment under the video states “There’s definitely a nig or a nog or something in there and those noises strike me as intrinsically racist.”

Another says, “It kind of sounds a bit like 'chink' as well. I think he says 'nogchink'. Yeah definitely 'nogchink'. He should be jailed or exiled at least.”

“I don’t know what this fucking white ass honky piece of shit is doing talking smack about us blogchimps but I for one would like to see him executed. That’s the only fair way of dealing with people who use words like chogblimps.”

A member of STFU (Speech & Telecommunications Freedom Union), who are campaigners of free speech, has said “This is another blow for freedom of speech. A man should be able to say what he wants in the privacy of his home. Furthermore he should be able to be filmed without the fear of it being taken out of context and flung into the public sphere and have people criticise something that was never meant to be there.

"Having said that we do not want to alienate the growing population of “Crudburglars” in the UK and remain that words like “Crudburglars” should never be used in the public sphere. Oops.”

Crowds of protesters surround the man who is currently seeking asylum within the Ecuadorian embassy. The president of Ecuador has said “He will make a fine addition to my collection of gringos who have upset the nation. I just need Jeremy Clarkson, Russell Brand and Jimmy Saville to complete the set.”