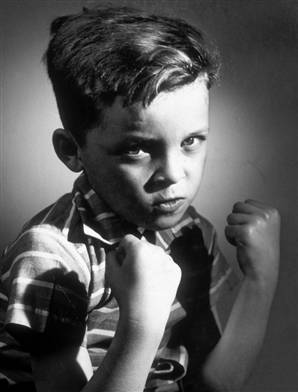 Tombstone shows off his intimidating fists.

"Tombstone has, this year, performed over a thousand instances of bullying in his local elementary school," quoted Markus Sauer, leader of the Bullying Federation of America. "This amount is unprecedented and came exceptionally close to the world record for bullying. Without a doubt, Tombstone is a role model for all those who will follow in his footsteps. His constant vigilance and attention have left no nerd, dweeb, geek, or fanboy left un-swirlied, not a single loser left without a most severe Indian Burn."

Tombstone, while quickly dismissing the award as "super-gay" and "exceptionally faggy", was clearly pleased to receive it. "Nerds," he said, his trophy in his hands. "This was just the beginning for you. Believe me, next year is going to be even worse. I got some ideas. You ain't gonna get away, not ever." Tombstone then leaned forward and pounded the desk with his fist. "And especially you, four-eyes. You know who you are."

Tombstone also indicated that he is planning to use some of the prize money to invest in brand new bullying equipment. "I'm hoping to make the leap from simple bully to super bad ass juvenile delinquent," he said. "Gonna buy me some spraypaint, maybe an Airsoft. I gots a great year ahead of me."

Featured Article  (read another featured article)
Featured version: 27 February 2021
This article has been featured on the front page. — You can nominate your favourite articles at Uncyclopedia:VFH.