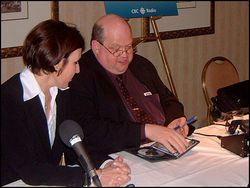 Lexicographer's in Oxford, UK have gone on strike after several words were found missing in the English Language. Chief Lexicographer Sir Bernard Ramp-Dedilicious called strike action at the Oxford English Dictionary and has appealed to the English speaking world to speak "spanish or something instead until we can find and replace these missing words" Nobody is quite sure what these missing words are but it is hoped that they can be found before people have to start changing roadsigns and telephone numbers. Over 70 Billion people in the world use english as thier first language and the ban of the english language is expected to cause economic problems globaly. Problems first arose when lexicographer's couldn't find the original manuscript for the letter "C" and can't decide if they can remember all the words of if there is some missing. Strike action is expected to continue on monday at the Dictionary's Headquarters, printing staff have been told not to come in for the fore-seeable future. As a result the Goverment in the UK is seriously considering a switch to Esperanto for schools unless this missing manuscript can be found over the weekend. The Piano Tuners Union has also called strike action and are refusing to tune anyones Pianos until the situation improves in Oxford.