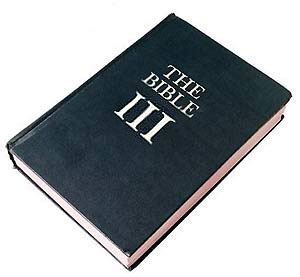 The Bible III, sales are expected to peak

NEW YORK, New York -- Nearly six months after its high-profile release, "The Bible III" is still lagging far behind initial sales projections, say publishers, Gog and Magog. The Bible III, latest installment of the wildly popular Bible series, takes up where The New Testament left off, and continues the adventures of its hero, supernatural demi-god, Jesus Christ, as he travels to India to do battle with an assortment of bad guys and half-human creatures.

While the new Bible III is currently in its fourth printing and continues to sell well in smaller, specialty bookstores, larger outlets including Borders and Barnes & Noble have been heavily discounting and even remaindering to keep the book moving.

Recent reviews by the New York Times has continued to reduce sales as the newspaper has noted that it is an "outstanding work of fiction that the author, God, must have dreamt up in a opium induced nightmare." The New York Times Book Review, however, ignorned its parent corporation and called the book a "blantant attempt to sell out. It is a drastic homophobic retelling of a story everyone knows and confuses the parts of Mary and Jesus to such an extent that it is clear God must have been sitting on the shitter when he came up with it. And aren't there already three other sequels? I mean, come on!"

"I think that it may have been a bit over-hyped," commented Chatsworth, California, Borders manager, Rich Mortensen. "Even the original Bible didn't catch on immediately, and even though this new sequel remains true to the original, it's still a book you have to warm up to over time."

Some critics of the new Bible have suggested that resurrecting Jesus for this sequel may have been a mistake, weakening the character and lessening the impact of the hero's torture and apparent death in the New Testament. "Over the years, people have gotten used to Jesus dying on the cross, and then rising for a few weeks, then flying off into Heaven. End of story," said Max Villanova, literary critic at the New York Times. "The fact is, Jesus is good in small doses. The more he interacts with the world, the more preachy and ineffective he seems." Villanova suggests that book might have garnered more interest if it had followed the same formula as the first two Bibles, introducing all nearly new characters and a story that references the earlier book but doesn't repeat it.

Other critics have suggested the pairing down of the twelve Apostles to only four (Thomas, Simon, Dorian, and Judas) into a kind of spiritual strike force, also hints too strongly of making the book more "Hollywood friendly," and detracts from the action.

Calisagasta, CEO of Gog and Magog Publishing, remains confident that sales will pick up as positive word of mouth spreads. "This is typical of the genre," he said. "Look at the Book of Mormon. Everybody said that would tank, and it's become one of our most consistent sellers. Just give it time."