UnNews:Ken Livingstone apologises for everything 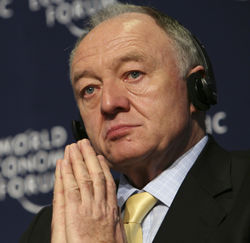 Ken Livingstone praying for mercy as he apologises for literally everything.

London, England -- There has been an expression of both relief and confusion today as former Mayor of London, Ken Livingstone, has decided to apologise for everything.

Although initially proclaiming that Londoners need to simply "get over it" with regards to the creation of the Congestion Charge during his term in office and that he refuses to admit that he is anti-Semitic when labelling everybody who voted in David Cameron as "Jews", Mr Livingstone eventually caved in and told UnNews reporters that he is "sorry if anybody was upset" by "everything that happened when I was in office."

When pushed to see whether or not he was genuine, Livingstone later replied, "I am sorry for introducing more bus lanes and subjecting drivers to them. I know you all hate buses pulling out on you. Bloody wankers. I am also sorry for Oyster cards. The geeks from IT told me you could use it instead of a credit card. I'm sorry for investing in the East End of London so that we could get the Olympics and have more bloody foreigners come over. But most of all, I am sorry for standing up for the gays. It turned everybody gay and that's a shame."

Responses to Ken Livingstone's apology have been decidedly mixed, with the current Mayor of London, Boris Johnson, criticising Livingstone's decision to apologise as "without you, I would never have dreamed up Boris Bikes - sponsored by Santander" whilst Transport for London fare dodgers felt "betrayed" by Livingstone as they had previously thought he was accommodating of their culture and will now be supporting "the politically correct" Tory party and thus have outed Livingstone as intolerant.

However, Livingstone's apology has been welcomed by poor people who can't actually afford to use TfL's services, disgruntled motorists, hipsters and the gay community, who all suffered through hardship, trauma, physical abuse and emotional stress throughout Livingstone's time in office, particularly when he deceived them into thinking that he was there for them when they needed him. It is thought that Livingstone will be compensating these groups out of his own pocket.

Livingstone's apology provoked further controversy when ISIS praised Livingstone when he apologised for "the mistakes" he made during his handling of the July 7, 2005 bombings. It is believed as a result of this, Ken Livingstone has been arrested for aiding terrorists and will be tried in front of a Grand Jury. When asked what would happen if Mr Livingstone were to be found guilty, Home Secretary Teresa May replied, "He will be deported to Syria where the authorities will deal with him appropriately."