UnNews:Julius Caesar summoned to appear in the Senate on 'back stabbing charges' 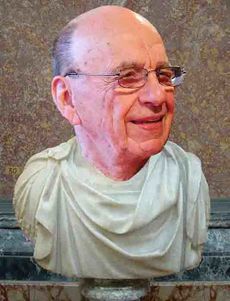 Julius Caesar: Call this a Roman bust? Where are its bloody tits!!??

ROME, Republic of Rome -- Dictator-for-Life Julius Caesar has been summoned to appear before a Senate Committee on charges that he encouraged henchmen to spread muck about the lives of the free citizens of Rome.

In a long list of alleged crimes, the Senators accused Caesar of killing off all his rivals and annexing Britannia as a private estate to fund his ambitions. They said that in a long career of damaging the lives of the patricians and plebians of Rome. Caesar's acolytes had illegally learnt about the private conversations of Rome's leading citizens by bribing or torturing their slaves and personal assistants. Personal information was also obtained for Caesar by his use of his favourite warrior queen Boadicea of the Sky-clad warrior tribe the Hackettes. Her scythed-armed chariot was a regular sight in the Forum, cutting off opponents at the knees or tripping up Caesar's enemies outside the Temple of Venus so that their bare backsides would be exposed to ridicule of the common multitude. Anyone who had stood up to Caesar had seen their reputation 'stabbed' and their statues thrown down.

But when it was revealed Caesar's allies had also stolen personal information from ordinary Romans, the local Mob demanded action. At a packed meeting in the Senate, a succession of Roman politicians stood up to denounce Caesar, his son Jacobus Caesar and former head of publicity, Mark Antony. Amongst those making a blistering attack on Caesar's reputation was Senator Gordian Brutus. He admitted that he had once been a close friend of the Roman leader and had recently attended an informal orgy round at Caesar's Palace. Brutus now demanded Caesar and others be forced to attend a meeting at the Senate to be held 'on and around' the Ides of July. He added:- 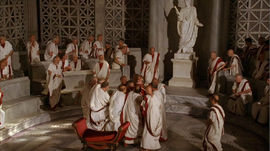 'Order..order..can the Right Honourable Senator for Witney put away the knife and resume his seat..'

For too long we Romans have let Caesar control our lives and bodily functions. I am as guilty of this as everyone in this chamber but now we must fight back. Let's bring this man and his minions before us to discuss this in the Roman Fashion.

In a hand-written document, Caesar said he would consider the 'opportunity to answer my critics'. He would 'sleep on it' and make up his mind by tomorrow. Caesar insisted that his close friend Marc Antony be allowed to attend and have the right to 'run through' anyone who tried to 'pull off his laurels' in the course of the meeting. If these requests were not met, Julius Caesar said he would 'retire' to Egypt to spend more time in bed with Cleopatra.