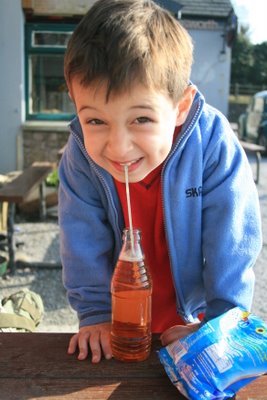 A five year old boy in Ireland just before the law was passed. He has stopped drinking now that the fun is taken out of it.

DUBLIN, Ireland - In a very unsurprising move today, the Republic of Ireland passed a law that lowered the legal drinking age in the country from ten to four years old. Approximately 0.0003 percent of the population was stunned at the announcement made by President Marie McDonald today, and these two people promised to protest in the streets of Dublin immediately.

Most of the older citizens of Ireland were happy with the passage of the law, as Corey Hale, 29, of Belfast put it, "This is bloody great, now I can give my six year old son Jacob all the beer he can handle without worrying about the police caring. It's not like they would have cared before, but now it's even better. We can be drinking buddies now, eh?"

However, little Jacob did not share the same enthusiasm about the new law as did his father. "I am just a lad in primary school, and me friends used to think I was cool because I would come to school and give them free beer. Now it's legal and they will not care because they can get their beer from their parents. Since the law passed I am going to quit drinking to find something illegal for me to do, but it's going to be hard on me dad to not have his favorite drinking buddy around."

President McDonald says she will wait and see what effects the new law has on the country. "I think it will be great. We need to teach our children that drinking is not just limited to their mums and dads, but it can be a family activity. I think prior to this law children thought drinking was something only older people could do, as if they were somehow not capable of it. Also, before passing this law we had to think about how the children under nine felt when they had to go to school and see the older kids being able to drink, but not them. I think this will even the playing field and allow everyone to get along."

The new law went into effect immediately and will doubtfully have any effect on the amount of drinking consumed in Ireland since 99.9997 (all but the two people mentioned earlier) of the population are considered "drunks" by the lowest possible standards. Next week the legal drinking age is expected to be lowered further, to the embryonic stage of pregnancy.