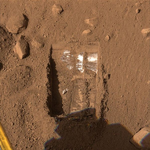 Ice cream can be seen just below the surface. Probably vanilla.

WASHINGTON, D.C. - NASA scientists confirmed today that there is indeed ice cream on the red planet. While testing a sample of Martian soil, they found conclusive evidence that can only be explained by the presence of trace amounts of ice cream. Upon the discovery, the control room of the Phoenix lander (which made the discovery) burst into celebration, starting with champagne corks popping and quickly escalating into such acts as homo-erotic man-hugs and high-fives. The presence of ice cream on Mars has long been debated and theorized by top scientists, but no conclusive evidence has ever been found until now.

NASA engineers made the discovery after sampling the Martian dirt, and placing that sample in the microwave on board the lander. When the inside of the microwave reached approximately room temperature, some of the dirt started to turn soupy, and chocolate chips could be seen emerging from the mass. This also confirms that complex varieties of ice cream are capable of surviving in the harsh atmosphere of Mars, in addition to basic flavors such as chocolate, vanilla, and strawberry. The lead scientist on the project, Mr. Robert Foster, was thrilled with the rapidity of the accomplishment. "We only started this project twelve years ago," he said, "and that's a really impressive time-frame for analyzing dirt. Also, the lander's robotic arm only took eighty-six hours to collect the sample and place it in the microwave! That's blindingly fast for us!"

The discovery has finally put to rest one of the longest-debated questions in the history of astronomy. However, it also raises many more questions. If chocolate chips are seen to be able to survive, then could such complex flavors as Rocky RoadTM and Chunky MonkeyTM exist on Mars? Could the channels on the Martian surface have been caused by a massive flow of nougat? Could the ice cream be mined by future astronauts to counter a dessert famine on Earth? Teams of researchers are now scrambling to answer these and other questions. The Phoenix lander, finished with the dirt samples in its area, began a three month long trek to an interesting crater approximately twenty meters from its current location in order to study a possible caramel deposit.

In a related story, NASA has also announced its discovery of liquid on the surface of Titan, the largest moon of Saturn. Scientists have identified the substance as liquid ethane, which is a component of crude oil. Upon learning of the presence of oil on Titan, many groups sprang into action. Republicans immediately demanded the utilization of these 'natural resources' to combat the current gas crisis. Bills were drafted that would increase NASA's budget by fifteen thousand percent, to six million dollars. Others were not so sure that humns should intefere with Titan. One activist said, "well, you know, I support the preservation of the Earth, man. And, like, even though Titan isn't the Earth, it's like...one with the Earth in spirit. You feel what I'm saying, man?" Despite assurances that there is enough oil on Titan to support life on Earth for over ninety billion years, it appears projects to drill for this oil are doomed to failure, to preserve the 'pristine environment' of the moon. (No, not that moon. Titan.)