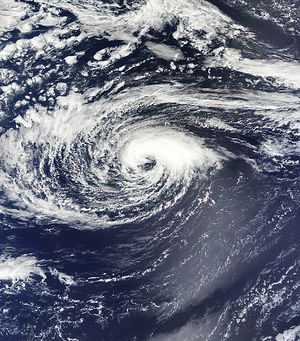 Nadine just had so much to give, and now we'll never know her story.

MIAMI, Florida -- Scientists at the National Hurricane Center have declared in a press release that they are entering a period of mourning following the unexpected dissipation of Tropical Storm Nadine, which was taken before its time by wind shear on October 4.

"Sure, we did some trash talking," said NHC Director Kip Leeward, who wore a black armband with a hurricane symbol on it to the wake, "but deep down we all loved Nadine. Nadine was a fighter. She was going to straighten out her trajectory and make a name for herself.

NHC scientists are always sad to see the passing of a great storm, but in most cases, Leeward said, there was at least "the silver lining that they went out doing what they loved." Nadine, in contrast, spent a tumultuous month in the Atlantic weaving an erratic path that never passed over anything bigger than the Azores.

"They probably never even knew what they had," Leeward remarked bitterly while taking hearty swigs of scotch. "I know we didn't."

Nadine is now the fifth-longest-lived Atlantic tropical cyclone on record, a distinction that researchers say doesn't help soften the blow.

"She was practicing," said Chief Modeling Scientist Ernesto Trough. "She was putting in the training hours most hurricanes just don't bother with these days. Nadine just wasn't ready yet, that's all. And now... now..."

Dr. Trough then asked for a moment alone.

As of press time, the entire staff is singing "Danny Boy."

This article features first-hand journalism by an UnNews correspondent.
Retrieved from "http://en.uncyclopedia.co/w/index.php?title=UnNews:Hurricane_scientists_can%27t_believe_Nadine_just_gone&oldid=6041967"
Categories: