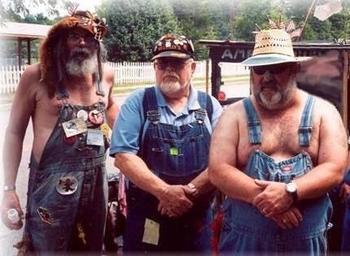 (Right to left) Levi Parnas, his lawyer, and George Clinton will appear in an exclusive interview with Sean Hannity tomorrow night, during part 2 of Rachel Maddow's interview with Lev Parnas. Confused yet?

1211 Avenue of the Americas -- After Lev Parnas's damning interview with MSNBC's Rachel Maddow in which Parnas confirmed what we already knew -- that Trump and his goons (including Mike Pence, Rudy Giuliani, William Barr, and Devin Nunes) are guilty as fuck -- Maddow's Faux News time slot rival Sean Hannity is scrambling to interview an Ohio farmer named Levi Parnas (not Lev) in order to rebut Lev Parnas's implications of several Trump administration members, and Trump himself.

But so far, it isn't smooth sailing.

"I don't wanna get involved in this mess," Levi says. "I don't even like Trump. Hell, I don't even watch Fox News."

He adds, "I figured, our audience can't read anyway, and the names are similar enough, they'll buy whatever bullshit we spoon-feed them. Reading Green Eggs and Ham to these idiots is like reading War and Peace."

Levi admits that it's "stupid" that he's being made to wear shirtless suspenders. "Mr. Hannity has no clue what farmers wear in real life. His idea of a farmer is Mr. Haney from Green Acres. We're not even like James Cromwell in Babe. And I've read books that make War and Peace look like See Spot Run.

"And the only reason George Clinton is part of the interview is because anytime a Clinton is on, or mentioned on, Fox News, their ratings go through the roof."

The legendary funk musician is not related to the political Clintons, Bill and Hillary.

Both interviews air tomorrow at 9 pm ET on MSNBC and Faux News, respectively.