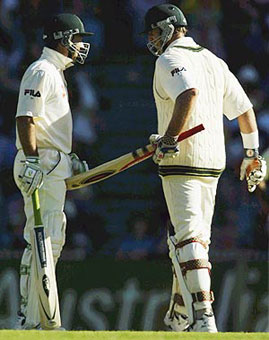 "Maybe Gary is right... Sex before cricket might be better than thinking about it during the whole test match..."

"Sex is a good thing, you know," said Kirsten, a famous sex addict. "You do some bang-bang and you feel better and well... it's best thing ever invented, right?"

Despite Kirsten's recent move to India and new coaching role with the national side, he has retained his South African lifestyle consisting of a lot of occasional sex with people he's accidentally met.

All Indian players took to the new warm-up technique enthusiastically, but some had a few objections.

"Well, it's all right when we play in India, then our wives and girlfriends can come with us. We can easily pick something out of the playbook." Said VVS Laxman, a well-known Indian cricketer. "But what do we do when we will have to play a series in Australia or England? Our wives are required to stay in India fulfilling all kinds of fascinating stereotypes -- we need to travel alone without them. What then!?" he asked.

Kirsten in response was unfazed by Laxman's slavish obsession with fidelity. "Hookers are everywhere."

"Yes, I totally agree," responded Laxman. "And this way I will not cheat on my wife with another woman. Cheating with a man is not real cheating."

Kirsten quickly cut off any further questions. "OK... No more questions. I need to find Sachin now. I have accommodated him in my room. You know what I'm talking about."