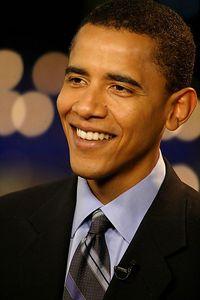 Obama's recent State of the Union address focused on the economy, funding for research, and the various species in the family Salmonidae.

WASHINGTON, D.C. -- President Obama may have just been making a funny, but Republicans found nothing amusing in the notorious salmon comment he made during his recent State of the Union address, with leading members of the party calling it "job-killing."

The Interior Department is in charge of salmon while they're in fresh water, but the Commerce Department handles them when they're in salt water. I hear it gets even more complicated once they're smoked.

Obama's comment concerned excessive bureaucracy in the U.S. government. After describing complexity on exports and housing, Obama joked that even fish are subject to red tape: "The Interior Department is in charge of salmon while they're in fresh water, but the Commerce Department handles them when they're in salt water. I hear it gets even more complicated once they're smoked."

Despite a chorus of lively chuckles from his audience, Republican frontmen later publicly denounced the joke. Speaker John Boehner decried Obama's comment as "job-killing" and claimed that it "would destroy jobs," adding that the joke will "take jobs away from the American people." 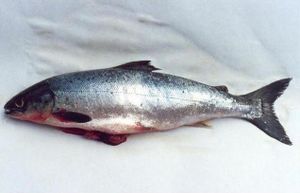 Could this fish crush your job?

Senator Jim DeMint (R-SC) agreed, saying that "[Obama's] bizarre salmon joke will result in... not fewer than 50,000 lost jobs in America, and possibly many more than that." When asked how exactly the comment would affect employment, DeMint asserted that "What the American people want is job assurance, and comments like the president's will ensure that our hardworking citizens will have nothing but anxiety in the near future." When told that he did not answer the question, DeMint emphatically replied "Democrats job-killing Obama crushing jobs."

Boehner later clarified his remarks in a 5000-word written statement to the press which contained a bulleted list of "Ways Obama's Salmon Comment Will Cost American Jobs." The list included:

The statement concluded, "Obama's lack of judgment in his State of the Union address is only one sign of a weak administration. His decision to make the salmon joke - which instantly killed American jobs - could only possibly have been worse if he had omitted the joke entirely, thus costing a staggering number of Americans their hard-earned jobs."

Democrats insist that Obama's joke was only a bit of levity. "But even so, the president's point was well-made," said recently deposed Speaker Nancy Pelosi. "Government redundancy and inefficiency is an issue that both sides of the aisle should be able to work on together. The negative response from Republicans is merely an extension of the party's recent rhetoric campaign, an attempt to drill phrases related to 'killing jobs' into every evaluation of Democratic policies. It won't work, and you know why? Because Americans are too intelligent to buy that kind of misdirection."