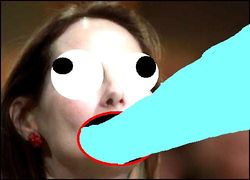 Ms. Royal unleashes her anger on the American midwest

PARIS, France/Texas - A new wave of tornadoes has hit at least six counties in the central US, a day after a massive political tornado devastated the country of France following their disappointing elections. Scientists claim these two incidents are purely isolated, though many French and American citizens are skeptical of their skepticism. The source of the storms is claimed to be the losing candidate of the French elections, former Ms. Universe and violent Marxist revolutionary Segolene Royal With Cheese. Ms. Royal, known as Ms. Quarterpounder over in the States, after hearing of her narrow margin of loss, cast forth a deadly fury of torrential storms and cyclones while reading out loud from a necronomicon.

Those who believe that these two events are indeed related almost unanimously believe Ms. Royal is to blame. Not only did she lose the election, but the iron-fisted conservative who beat her, the Slavic immigrant and former colonel in Slobodan Milosevic army Mr. Sarkozy, borrowed many of his ideals from the rednecked wastelands of Central North America. It would only make sense that the summoner of these apocalyptic tornado storms would be Ms. Royal herself.

If Ms. Royal did indeed turn her destruct-o-meter to 11, then she and her liberal colleagues have potential to lose a large part of her more easygoing crowd.

"I don't want to be a part of a party that wishes destruction on other parts of the world, and actually does it," say Parisian Pierre Robeson, "At least the United States doesn't try to pass off their war of terror as a natural anomaly." Contrary to what Robeson and others are saying, the more fanatic part of France's liberal crowd are liking this turn of events. 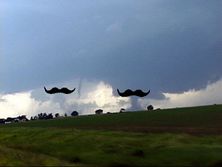 Two tornadoes prepare to touch down and wreak le havoc

Ardent French socialist Washington L'Irving stated: "Sure, I hope Ms. Royal was the one who did this. Deposing of governments, nationwide strikes and mass riots are so 18th to 20th century. It's time we step up and start fucking with nature."

Over here in the states, almost no one is happy. Luckily, since President George W. Bush and the newly elected French President are in cahoots and were both wary of this attack, action was taken almost immediately. Another possible Katrina was prevented. The French cyclones cut a swath from Iowa down to Texas, but were ironically stopped by a Texan equivalent of the French Maginot Line, except this time it faced the right direction and hit the tornadoes head on. The two forces duked it out for several hours before the tornadoes ultimately surrendered and dissolved into an area of low pressure.

Officials estimate deaths in the double digits, including the town of Greensburg being almost completely destroyed. Suspiciously, the town's courthouse and French embassy were two of the few buildings that survived the onslaught. The matter is still under investigation by both the US and the UN.

Ms. Royal refused to comment on the issue, and is keeping herself locked up in her self-proclaimed "Laboratoire des Terreurs Inimaginables" to plan for the next president election, which experienced political scientists predict could happen any time between two months to five years.

For those who are easily amused, Uncyclopedia has a totally unrelated article about:
The Dice Man
Retrieved from "http://en.uncyclopedia.co/w/index.php?title=UnNews:French_tornadoes_devastate_US&oldid=5385929"
Categories: