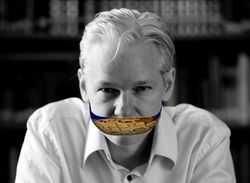 LONDON, England -- "FREE Julian Assange", a marketing campaign run collectively by a number of online businesses including Amazon, PayPal, Visa and MasterCard during the build up to the Christmas period in 2010 has been viewed as a massive success. The campaign promised a founder of whistle-blowing website Wikileaks with every purchase which saw an unexpectedly high take up from "bitter disenfranchised youths with too much time on their hands", according to independent News reports.

"We are delighted, of course," said a Governmental Banking Official, "Julian is a high profile figure and popular guest speaker, I know he goes on a bit, and don't tell him anything unless you want the world to hear about it, but he sort of looks funny and people seem to sort of like him. This has been one of our most successful campaigns ever."

Complaints have been few and far between, with the only bugbear for a small number of people that several Assange's have proven not to be housebroken. A spokesman however has pointed out that he is Austrailian.

Demand for the services of MasterCard has been so high that their servers have struggled to deal with the amount of traffic with the company announcing record online requests. The campaign follows the tradition of numerous others that had met with various levels of success including "FREE Bobby Sands", "FREE Leonard Peltier" and "FREE Nelson Mandela".

In an unrelated story we'd like to thank our American Imperial backers for allowing us the right of free speech in supporting their worldwide interests, in an open, honest and non-judgemental manner.