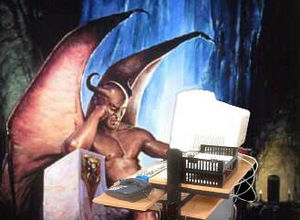 Dobyns tried, but failed, to take the big guy down.

Washington, DC (wikinews) - Jay Dobyns, from 2001 to 2003, infiltrated Hell in order to take down Satan, but only succeeded in the indictments of 16 Cacodemons. Recently, through America's Most Wanted, his identity has been made public, and he now fears for his safety. Said the agent:

"I had to fake a demonic summoning in the disguise of a politician in order to get into Satan's personal circle. Now that my identity has been revealed, I fear for my safety. Satan will be sending some of his buddies after me, and the government failed to provide me with a priest with which to protect myself."

The FBI, which Dobyns works for, has refused to give him aid, and not only does Hell have it out for him, but also other unpleasant planes of existence. For example, the FBI could have put him under the Witness Protection Program, but despite repeated pleas on the part of Dobyns, they refused to do so. Dobyns isn't the only agent with this problem, however. Other agents who have infiltrated similar organizations are still in danger, and are filing lawsuits with the FBI.

Dobyns lives with his three daughters, ages 4, 7, and 8, a small dog, and his wife of thirteen years at Purgatory. Whoops! Sorry, Dobyns.