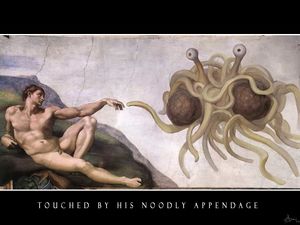 Fears of a fresh wave of anti-deity violence have forced the Flying Spaghetti Monster (pictured) into hiding.

CINEMAS, Everywhere -- Christians across the world are calling for a boycott of "atheist blockbuster" The Golden Compass because of fears it may spark a fresh wave of deicides. The film, based on the first book from the His Dark Materials trilogy by Phillip Pullman, is said to have a strongly "anti-religious feeling" and contains explicit instructions on how to kill God.

"It's all there," says Bill Donohoe, the president of the Catholic League in the United States "it tells you exactly how to kill God. All you need to do is open up a rift into another dimension, create a giant basalt fortress, amass a massive army and fight a battle with the forces of heaven."

There are fears that parents, thinking it just another children's movie, will inadvertently expose their children to ideas."Parents will take their kids to see this movie and the kids will think it's OK to murder God. That's not the message we want to send to our children."

Many fear that a fresh wave of copycat killings way ensue. "Kids are very impressionable, that's how we get them to believe in God in the first place," says mister Donohoe. Since the book's release, some 17 gods and demi-gods have been found dead in similar circumstances including Jupiter, Thor and Osiris. Speaking from the depths of Valhalla, Norse thunder-God Thor said that he was "positively sure" that his death was a direct result of the material printed within the His Dark Materials series. The spate of killings was thought to have died down but it is feared that the film, starring Nicole Kidman and Daniel Craig, could cause it to flare up again. The Flying Spaghetti Monster is reported to have gone into hiding.

As well as including instructions on how to murder the omnipotent creator of the universe the series also contains other examples of anti-Christian bias. It suggests, for example, that the Church is less than comfortable with the concept of sex and that evolution may have some basis in fact. It also states that bears are supeior to humans (althogh it is not far from the truth).

In a communique from his undisclosed location, Christian God Yahweh says he is not worried. "Bring it on bitches!" he said "I have nothing to worry about. I'm all-powerful. I have an army of angels. I have a giant beard in which I can store my various hats. I have nothing to fear. Maybe some lesser gods do but I certainly don't."

The film is in cinemas everywhere now.